Look What The Humans Dragged In

When The Queen and I married almost 8 years ago, we merged households and blended menageries into one herd of two dogs and four cats. Over the years, we lost a few of cats and gained a dog. When The Queen's beloved Yakmaster was put to sleep earlier this year, we agreed that we would not "replace" him and would allow the current pack to dwindle to zero through attrition. The theory is that we would enjoy some time free from the responsibility of animals before, if ever, committing to the joy and pain of animal companionship.
We were doing very well resisting temptation until this happened: 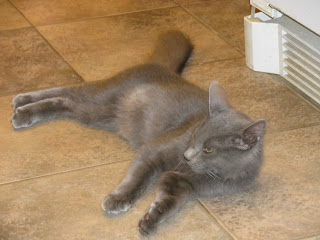 How did this happen to become sprawled on my kitchen floor you ask? I shall endeavor to tell you. I came home from school a couple of weeks ago, and The Queen said: "Would you like to go for a walk?" I debated the question for a few moments as: 1) I was tired, 2) I had a lot of studying to do, 3) I wanted to spend some quality time with The Queen, and 4) I really needed to get some exercise. Ultimately, the desire to go for a walk with The Queen won out, and off we strolled for a late evening wander around the neighborhood.
I should, perhaps, mention here The Queen's uncanny knack for spotting furry animals. It's like Doug from the movie "Up": "Hi! My name is Queen Ginger. I love you. Will you be my...KITTY! Will you be my...RABBIT!"
Anymongrel, as we walked along one of the main roads through the neighborhood at the edge of a small park area, The Queen looks into the shadows and says "Kitty". Of course, we have to stop for a moment to say hello to the kitty. He looks young, about 4 to 5 months old, and thin. He was wearing no collar and seemed to be in overall good health. The Queen knocked on some of the doors nearby to see if anyone was missing a kitten, but no one claimed him.
Well, neither of us was going to leave a cute and fluffy in the middle of a field with no visible food or water in the middle of the night next to a busy road. I walked back to the house, got a bag of cat food and returned with the car. The Queen got in with the kitten who promptly devoured the food I brought.
We started debating about what to do with said kitten mindful of our promise not to add to the menagerie at this point. We posted our find on Facebook to see if anyone had an interest in a sweet, adorable, little guy. No takers. To make matters worse, he looks very close to a Russian Blue which is one of my all time favorite cat breeds. We think he might be a Nebelung which is a breed derived from the Russian Blue.
Of course, he had to have a sweet, gentle personality with a strong purr and a willingness to cuddle.
And then there's the soft, silky fur.
Oh, and the face... 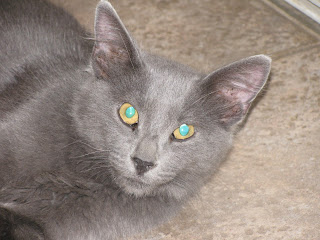 How can you resist a face like that?
So, it looks like we've been chosen to be the companion to this ball of cuteness and fluff. We have decided to name him Spanky McCloud.
Welcome to the family you little rascal.
Posted by Daddy Hawk at 10:27 PM 9 comments:

Email ThisBlogThis!Share to TwitterShare to FacebookShare to Pinterest
Labels: Animals, The Queen

"State interference is an evil, where it cannot be shown to be a good. Universal insurance, if desired, can be better and more cheaply accomplished by private enterprise. " Oliver Wendel Holmes, The Common Law.
Posted by Daddy Hawk at 1:12 AM 2 comments:

I am feeling the need to shore up my gun blogger cred today. So, I thought I'd take a moment to share a little something I prepared for a friend who is interested in learning to shoot. Enjoy.
The Four Rules
1. All guns are loaded.
2. Never point the muzzle of a firearm at anything you are not willing to destroy.
3. Keep your finger off the trigger until your sights are on the target and you are ready to shoot.
4. Know your target and what’s beyond it.
Memorize these four rules. They are the basis of all firearms safety. It is highly unlikely to the point of being statistically impossible to be hurt by or hurt someone else with a firearm when obeying the four rules. Further, there is no such thing as an “accidental discharge” when properly handling a modern firearm in accordance with the rules. More importantly, no matter how many safety features that are designed into a firearm, the most important safety feature a firearm can have is the trained mind of the person holding it.
Further explanation of the Rules:
Last thoughts on safety:
Posted by Daddy Hawk at 7:11 PM 8 comments:

Thought For The Day

To the sweet, young thing in my Torts class: I know you're young and you think you're sorta cute; but, please, for the love of all that is sacred: Don't wear hip huggers to class if you're going to forget to do a crack check after sitting down. Someone give me a penny or a spit wad or some plumbers putty...something...anything.  I'd go wash my eyes out now, but I'm pretty sure this is going to be a recurring event.

By the time you read this (since I’m drafting it in the middle of my Wednesday night Torts class…I know…bad student, no bonus points – never fear, I’m keeping up with my class notes in another screen), I will have completed my first month (4 weeks actually) of law school. I have this to say about that….
My brain is full.
Not really, but it feels that way.
I’m still not getting much sleep. For instance, I had great intentions of getting to sleep before midnight last night after getting home from class at about 10:30 PM. No such luck. It was 1:30 before I finally put head to pillow; and, even then, I don’t think I actually snored until 2:00 AM. Caffeine is helping keep me awake, but it has a price. Friday night to Saturday afternoon, I slept for 13 hours and probably could have slept for another couple of hours if it weren’t for the fact that The Queen was cooking brunch and I was hungry.