So, once upon a time (just a few short years ago), I had the transmission on my truck professionally rebuilt by a reputable shop. Everything worked fine right up until I had to park it a while back to take care of a pair of recalcitrant fuel pumps and assorted other maintenance tasks that needed doing. As such, this is not a post in which I will be bagging on the transmission shop. Their workmanship is not in question here.
Having said that, never assume that a shop did their work correctly. They offer warranties for a reason. As Reagan said, "Trust, but verify."
As mentioned in a previous post, the most recent test drive efforts revealed the transmission pan was leaking automatic transmission fluid (ATF - the stuff that looks like cherry koolaid when it's new and day old coffee when it's neglected) like a medicated St. Bernard. Now, there is no good reason for a freshly and professionally rebuilt transmission to be leaking after less than 10,000 miles of driving. Unfortunately, it has taken far longer than I would have liked to find time to go tracking down the source of the leak.
The first thing you need to do when investigating an automotive problem is to try an figure out the source and/or cause of said problem. Examination of the transmission filler tube/dipstick holder showed no visible evidence of cracks or leaks. Ditto for the transmission cooler lines. That's a plus. Looking at what was sitting directly above the large pool of what used to be ATF on the driveway pointed me squarely at the transmission pan. The pan on my truck is held on by 14 bolts which sandwiches a gasket between the pan and body of the transmission. The bolts are supposed to be torqued to 168 inch pounds (roughly 14 foot pounds). The pan and bolts were suspiciously coated in ATF.
So, having localized the source to the pan and knowing the torque specs for the bolts, I finally got a chance to crawl under the truck earlier today with torque wrench in hand and discovered, much to my dismay, that all 14 bolts were not only not torqued to spec but barely finger tight. I am exceedingly thankful that all 14 bolts were still attached to the transmission.
After giving each bolt a proper torqueing and wiping down the pan and bolts of excess ATF, I set about trying to refill the lost ATF into the transmission. Only to discover that I did not have enough ATF on hand to completely refill the transmission. The good news is  that  no further ATF was seen escaping the pan and its bolts.  So, I think that leak in the dike was plugged.
Grumbles and cursings at the inevitable delays and a trip to the auto parts store later, I now have enough (hopefully) ATF on hand to finish replenishing.
But wait, there's more. While doing the ATF refill kabuki dance, I discovered that the transmission cooler lines were drooling a little ATF at the fittings to the radiator (which also acts as a transmission cooler). OH COME ON ALREADY!!!
If it ain't one thing, it's another.
So, assuming the weather cooperates, my morning tomorrow will involve tightening transmission cooler lines, refilling ATF and hopefully dropping the truck at the muffler shop. Wish me luck and no more surprises.
Posted by Daddy Hawk at 1:30 AM No comments:


I have absolutely no need for an Short Barrel Shotgun, and I have issues with paying Uncle Sam $200 for the privilege of a "mother may I?" tax stamp, but that just looks super cool to me. It appears to be a Remington 870 cut down to about 12 inches with ghost ring sights and a ported barrel.
Black Aces Tactical does something similar for the Mossberg Shockwave 12 gauge pistols. I'm not sure I'm quite mental enough to touch one of those off with 00 Buck self defense loads, but I could see carrying the SBS in a over the shoulder scabbard a la Ash from Evil Dead / Army of Darkness.
I could walk around yelling "THIS IS MY BOOMSTICK!!!" This is Texas. It's legal. It'd be great times.
Posted by Daddy Hawk at 8:00 AM No comments: 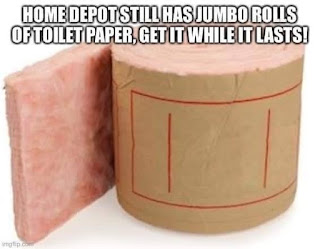 The longer this COVID-19 stay in place crap goes on, the less this seems like a joke...especially when you have a germaphobe in the house who goes through more toilet paper in a day than the other 3 of us go throw in a week. 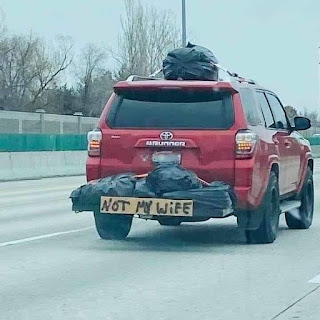 The Queen is alive and well. I promise. 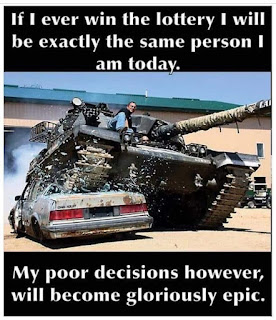 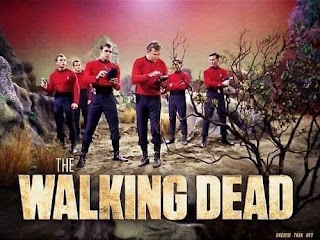 This is why I don't wear red shirts. 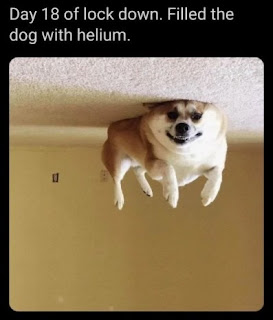 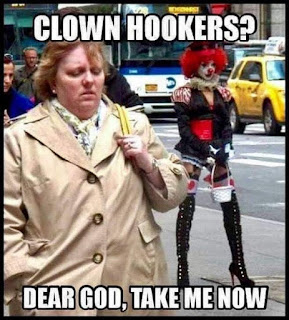 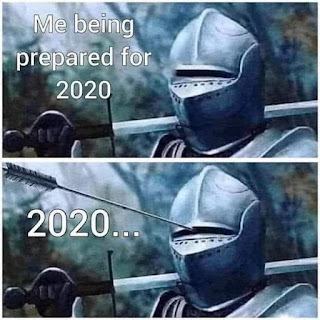 Yep, pretty much nailed that one. 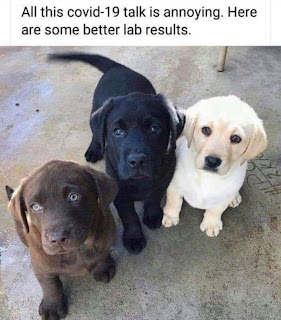 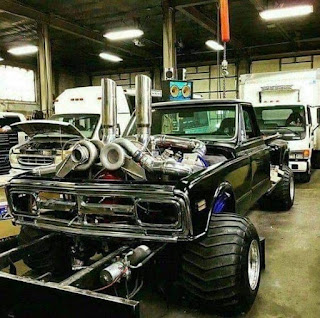 He has no idea where he is going, but he will get there VERY fast with those twin turbos. 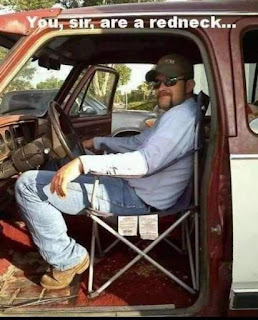 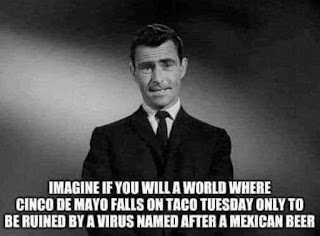 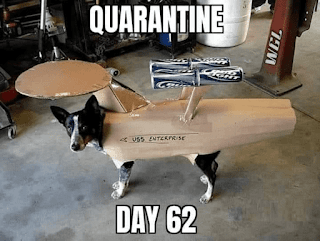 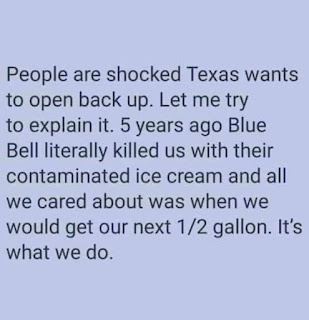 That pretty much sums it up right there. 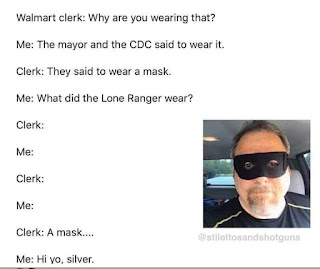 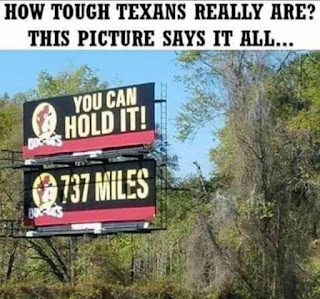 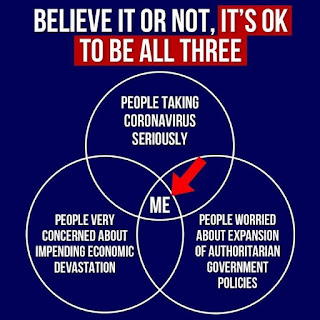 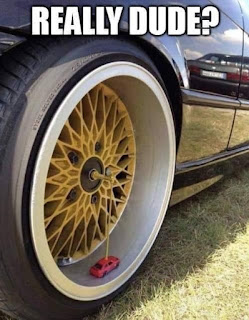 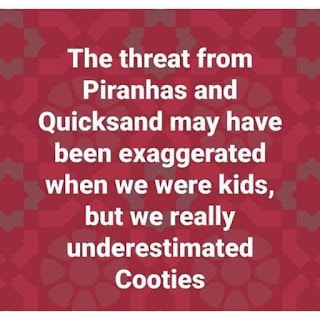 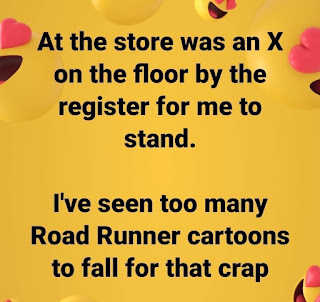 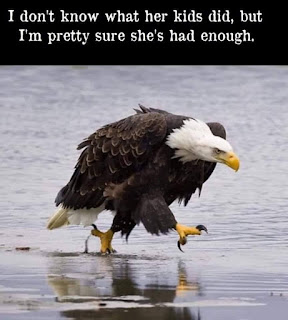 Free time has been at a premium since we last checked in with Daddy Hawk. Even with the COVID-19 stay in place orders (which are slowly being relaxed here in North Texas), there is always something that  needs doing and many projects in the queue that need attention not the least of which is overdue repairs on both vehicles.
The Queen's chariot is long overdue for a new driver's seat cover which has been worn through over the years by too many butts sliding across it. One was ordered and has arrived awaiting my time and attention. It's not an easy fix, but it is doable with a minimum of cursing and blood. Pro tip: if you have leather seats, sit into them as opposed to sliding into them if at all possible. I will try to document the process of replacing the seat cover here if I remember to take pictures.
The Queen's chariot is also in need of a new power steering cooler as the existing one (which Ford conveniently included as one part with the A/C condenser) took a shot from an unknown object (or just let go over time) and is drooling power steering fluid like a St. Bernard with a mouthful of Novacaine. Having done the radiator a while back, I know what I'm in for which is why that can has been kicked down the road a time or two. It's a full day of disassembling the front end, draining fluids, cursing, threatening, begging, praying and generally trying to avoid insanity. The shop quoted $385 in labor to do it for me.  So, I'll be sucking it up and getting my hands dirty with that one soonish.
The Queen's chariot is not done with me yet. While I'm throwing wrenches at the power steering cooler / AC condenser, I have to go chasing a radiator fluid leak. I'm hoping it's just a loose clamp. I can't see any evidence that there is a more serious problem, but one never knows when you are talking about a motor with over 260,000 miles on it. Never let it be said I don't get my money's worth out of my vehicles.
That leaves the project F150. I just replaced the radiator which had a hairline crack and was at least partially responsible for my coolant leak and overheating issues there. I suspect it has a leaking head gasket and will be testing that soon. It also sprouted a transmission fluid leak which I suspect is coming from an overtightened pan gasket. I just need a dry afternoon to get under there with a torque wrench and verify that. I have a replacement gasket for it if necessary. While I was crawling around under it a couple of weeks ago, I also noticed this: 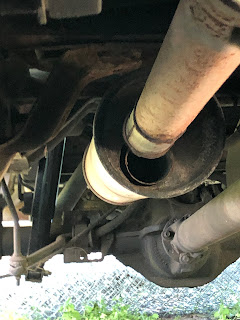 I'm 85% sure that wasn't like that when I put the bed back on after replacing fuel pumps, but I'm also 100% sure it was hanging by a thread because it's always had a more or less straight pipe sound. I've  got a quote from the local muffler shop that I like which will be done after it's road tested.
Way down the list for this truck is a rebuilt engine. I'm going to stick with the stock 302/5.0L block, but I'm hoping to tweak a little more horsepower and torque out of it in the process. Discussions will need to be had with my cousin the mechanic before deciding which way to go. I'd really like to ditch the automatic transmission and swap in a 5 speed manual, but that's just crazy talk....which means I'm seriously researching how to make it happen.
This, of course, means I need to invest in more tools. What a shame.
Posted by Daddy Hawk at 9:43 AM No comments: