Anyone? Great Pyrenees. Good momma and pappa dogs. You too can own an abominable slobber dog. 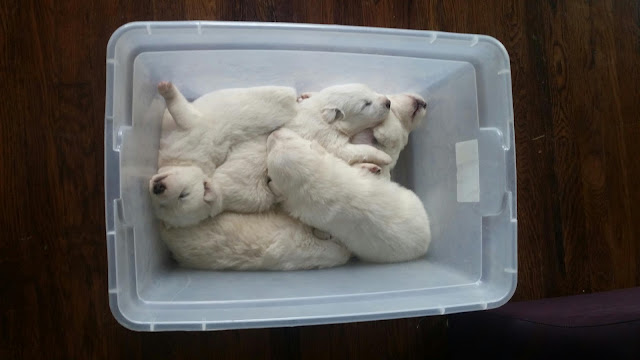 The Tale of The Tape

Since I was laid off just shy of 10 months ago, I've been on quite the roller coaster ride. I had to keep a spreadsheet of all the jobs I applied for several reasons not the least of which was to keep track of all the online login information for each company's career website. That gives me a little bit of nerdy data to offer up in lieu of real content.


First, I submitted 128 applications (plus or minus a few). I say plus or minus simply because there were a few duplications (submitting directly on the company website as well as a recruiter website for the same position, submitting for the same position more than once when it was reposted, etc.). The for real, actual number is still well north of 100 and probably no less than 120, but I have 128 positions recorded on the spreadsheet. So, that's what we are going with.

I submitted resumes to about 95 companies. I have to say about because it's hard to tell what company you are applying to through a recruiter unless they tell you. I have 95 discrete employer/recruiter entries on my spreadsheet, and I'm pretty confident that there are only a few overlaps because you start to see patterns in the wording of the job postings.

I applied for jobs in 46 cities. At my current career level, there are only so many senior level, high paying positions available. You have to be willing to go where the work is. I hamstrung myself somewhat by refusing to apply to positions in places like Chicago, New York or Boston (or Liberal Hell as I like to call it...where a lot of insurance companies call home) where I would be miserable for one reason or another. The one exception to the liberal hell rule I made was for my wife, The Queen, who has dreamed of moving to California for as long as I have known her. She wants to live on a beach (or at least in the same county as a beach) in the worst way. So, several applications were made to cities in the Peoples Republic of Commiefornia including San Fransicko of all places.

Yes, it made my skin crawl to do so. But, such are the things I do for my love.

Those 46 cities were scattered across 18 states. Most were in the south and west, but there were a few attempts at the northeast. See the "liberal hell rule" above.

Of all those applications, only 14 companies decided to check my teeth with an interview.

Of those 14 companies, only 4 or 5 of them lead to serious final interviews. The Florida job was the closest I got before the now new job. I was in the final cut of 3 or 4 for that position. For whatever reason, They liked someone else better.

This whole process has taught me a lot.

First and foremost, is always take what's said with a grain of salt. Six weeks before I was laid off, I had a great review with a healthy bonus and discussions of development for the future. Less than two months later, I'm out the door with a blatant lie for an explanation. I have since proven that at least part of the explanation they gave me (eliminating my position) was an outright lie. The real reason I was let go will probably remain forever a mystery unless I run into one of my former coworkers at a bar after they are deep in their cups. I continue to have my suspicions, but closure will probably await Judgment Day.

Second, sometimes hard work isn't enough. When I arrived at my temporary position, I was told they never hired temps. I found out later that several of my coworkers there had been temps before being hired full time. Within 3 weeks, I was approached about whether I would consider going full time as my work had been noticed and appreciated by the client (a major soft drink company). I allowed as how full time employment was my goal, and what did they have in mind? The short version is that their salary range for the position was well below what I was being paid as a temp, and there was no way we were ever going to be able to bridge the gap (it would have meant a permanent 50% pay cut from my previous full time salary not including bonus).

That brings us to the third takeaway: flight risk. It is almost impossible to avoid giving a prospective employer your prior earning history the way online application systems are geared. In those cases where I could not hide it and we got to the interview stage, the salary and bonus from my last job was a stated concern for several of the employers I talked to. When a supervisor position came up at the company I was temping at, they didn't even give me the opportunity to reject an offer as they felt the position would not challenge me enough and the salary would have me moving on to another position in six to nine months.

Another lesson learned was that getting an interview was as much a matter of timing as it was hitting the right keywords in the resume parsing software. It is a reality today that the first "read" of your resume is a computer software program parsing the data looking for certain keywords. I could probably have gotten more interviews had a tailored my resume for each individual position, but that is a tedious process to say the least.

Finally, it is still a popularity contest once you get passed the HR cyborgs. My new boss is someone that I knew somewhat peripherally at another company. There is also someone at the new company that I have known since my first job in insurance (20+ years ago...and I still have the tie she gave me as a Christmas gift about that long ago). I'm pretty sure those two connections in conjunction with my experience were the deciding factors.

There are other takeaways that I will try to mention in the near future, but work starts early tomorrow. I'm outta here.
Posted by Daddy Hawk at 9:40 PM 6 comments: