I need a favor. The other day I posted "Another Test" in an effort to learn how to upload videos to the blog. Only one person has commented on this post to tell me that the video is not visible.

Anyone else not able to see it?

You do not know me, and I do not know you. My God warns me not to judge others lest I be judged myself; however, I your case, I would say that you had best be glad that I am not on the jury or in the same room with you. That judging others thing and the whole "vengeance is mine sayeth The Lord" thing just might have to be conveniently forgotten for a time.

Having said that, I do not write to condemn you as God will see to that far better than I ever can no matter how temporarily satisfying it may be to me. No, instead I write to thank you. I know that may come as a shock to you at this point in your legal troubles; however, it is a true and sincere thanks that I offer you nonetheless.

Why do I wish to thank you? Quite simply, you have succeeded in restoring some small measure of my humanity to me that I had thought lost forever. You see, I have been in the insurance claims business for over 17 years now, and I have seen some much injury, death and destruction that I am numb to it. I became immune to the tragedies of others. Very little, if anything, disturbs me to my core anymore.

That is, until you came to my attention. When I first read the story of your alleged crimes a week or so ago, I was not surprised that it had not made bigger headlines. Why cover the legal troubles of an abortion doctor when there is the blood of innocents to dance in in the furtherance of a gun control agenda?

Then I scanned an article too fast and saw a photo depicting the results of your "snipping" procedure. To say that I was shocked is an understatement, and I do not shock easily. I have seen charred bodies, decapitations and more in my line of work far more often that I care to admit. Those tragedies were merely the result of accident and misfortune. Your procedure, in comparison, is the work of precise, clinical intent.

And that is what disturbed me to my core.

That you could look at a perfectly formed infant (and don't you dare try to say it was nothing more than a fetus) and do what you do without a second thought is in my mind absolute purest evil far worse than anything that Jeffrey Dahmer or any other mass killer has done. Not only have you decimated an entire population of infants, you did with absolute cold hearted precision and you took payment for the service.

As a new father thanks to the miracle of adoption, my heart truly breaks for the hundreds and probably thousands of lives that you have ended. I do not understand what would lead a woman to seek out the services you and others like you provide, and it is not in my power to forgive in this lifetime. Perhaps I am not spiritually converted enough yet, but it is the truth nonetheless.

God will surely demand a reckoning from you, and I pray that I will be able to see His justice done.

In the meantime, I do thank you for showing me that there is still some humanity residing within me.

P.S. Seriously, never, ever come into my presence. Witnesses will not protect you.

P.P.S. Since the death penalty does not appear to be on the table for you, I'd ask for solitary confinement if I were you.

*For those that do not know or have not heard who Dr. Gosnell is, Goggle him at your own risk. Scan articles slowly as some contain graphic photos that can not be unseen.
Posted by Daddy Hawk at 9:18 PM 4 comments:

Just trying out a new way to upload photos when blogging from the iPaininthebutt. Nothing to see here. Move along.

Cuteness Overload and Other Random Photos 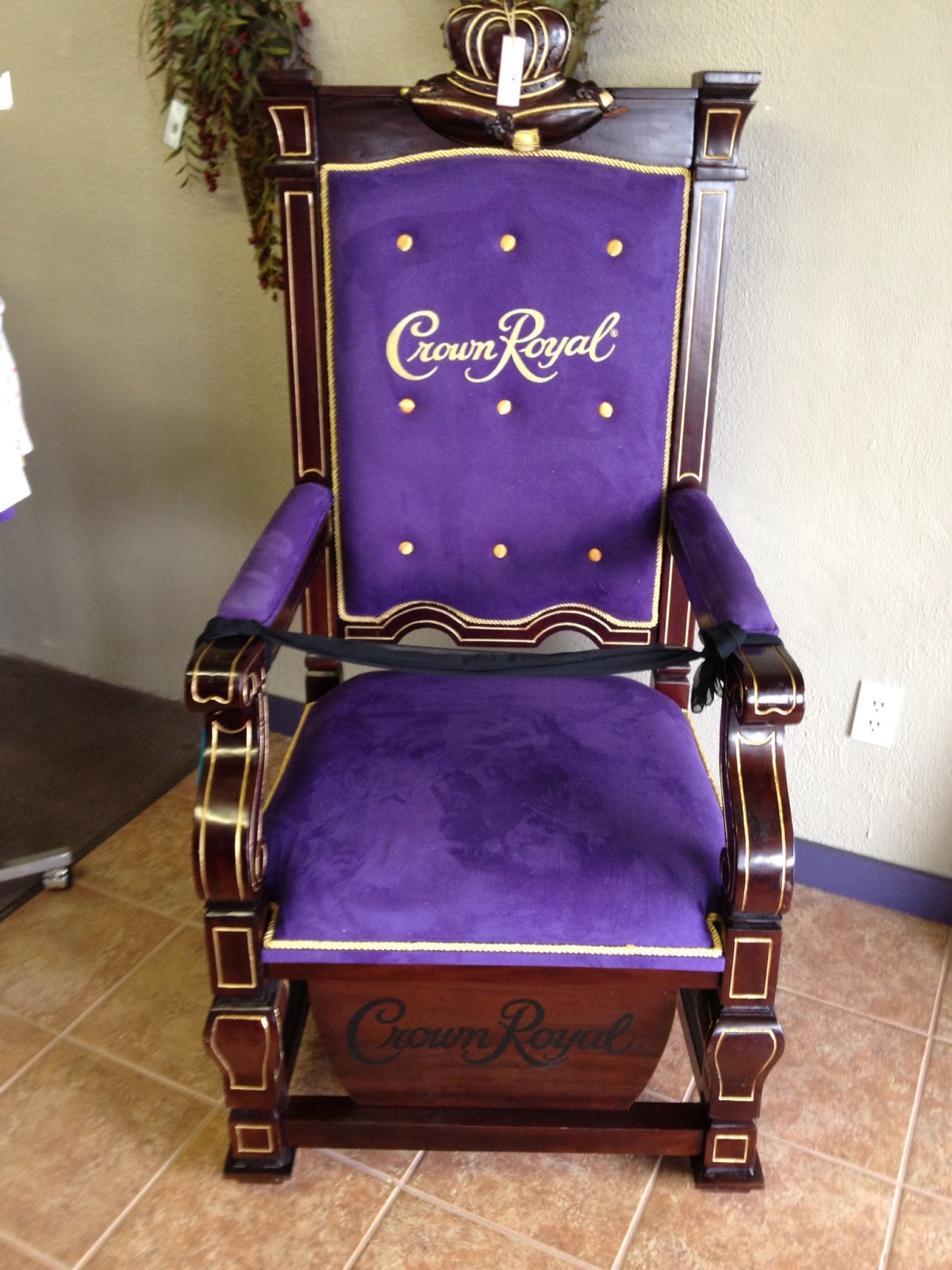 You've probably heard of the crown of thorns from the Bible, but I bet you've never seen a Throne of Crown. Spotted at a consignment shop near my inlaws house. Part of me really wants this for my whiskey drinking.

This is a photo of M&M leaving the state of her birth for the first time. That is the Red River below us as we blew into Oklahoma on very blustery day headed to Missouri to visit friends on trip that was postedponed when M&M was placed with us. It felt very liberating to be able to leave the state without having to consult anyone or get permission. 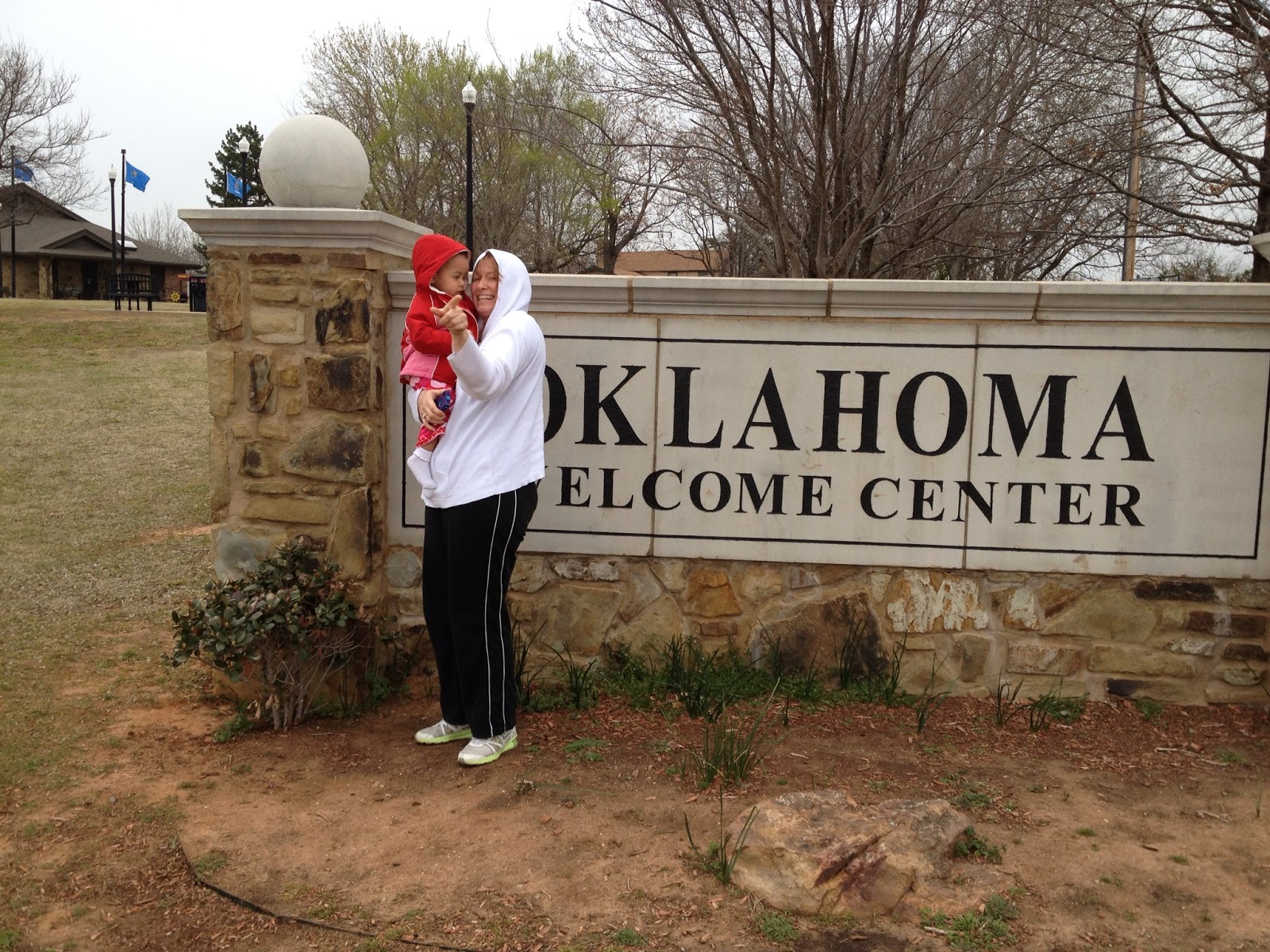 M&M and The Queen shivering at the welcome center on the other side of the Texas border for the obligatory "You aren't in Kansas anymore" photo. Somewhere, The Queen has photos of me and M&M in the same spot. 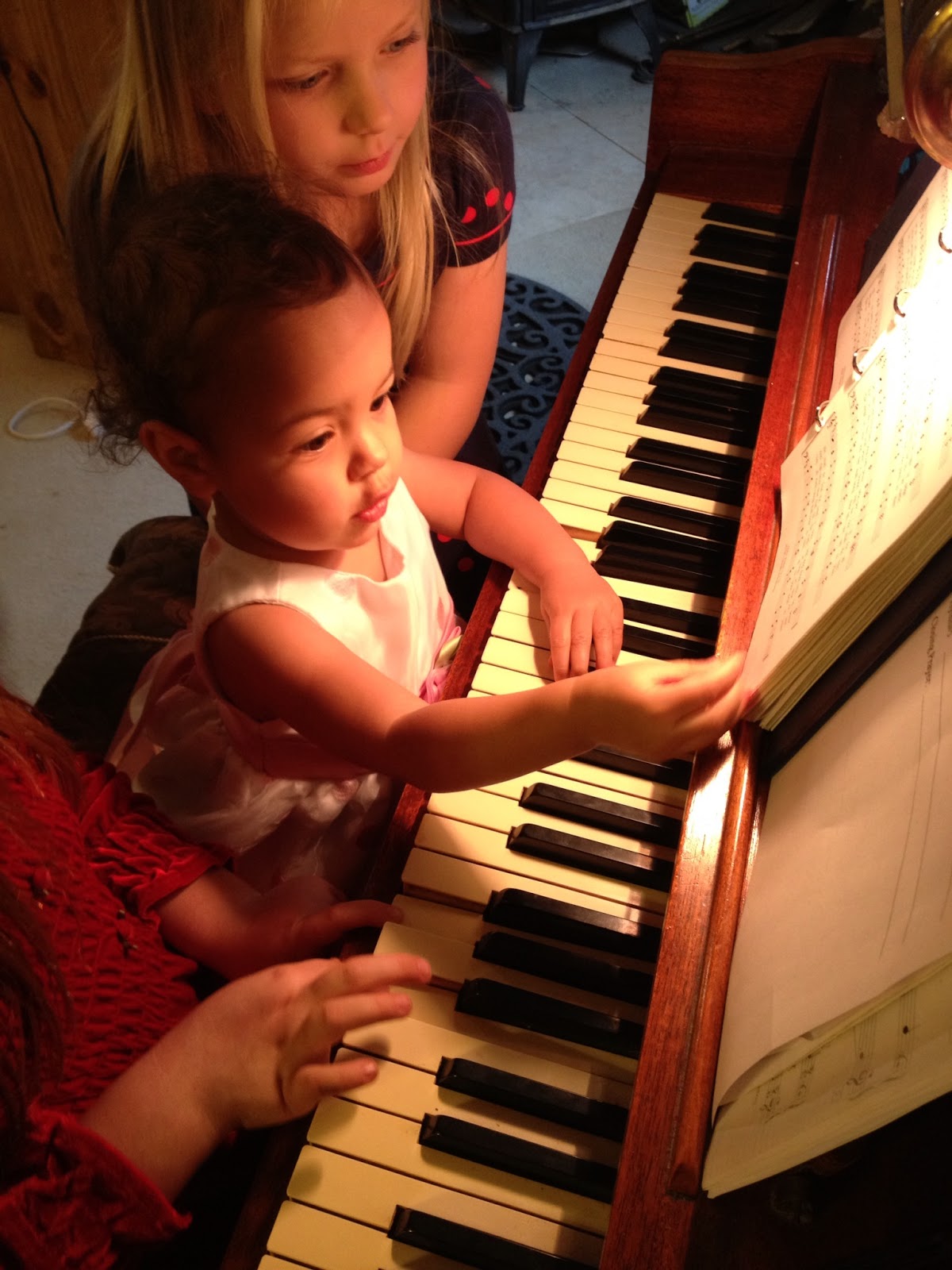 M&M has always had a love of music. She will dance like no one's business. This was the first time she really had any "hands on" experience with an instrument. She loved it. Somewhere I have video that I will try to upload if I ever figure out how. 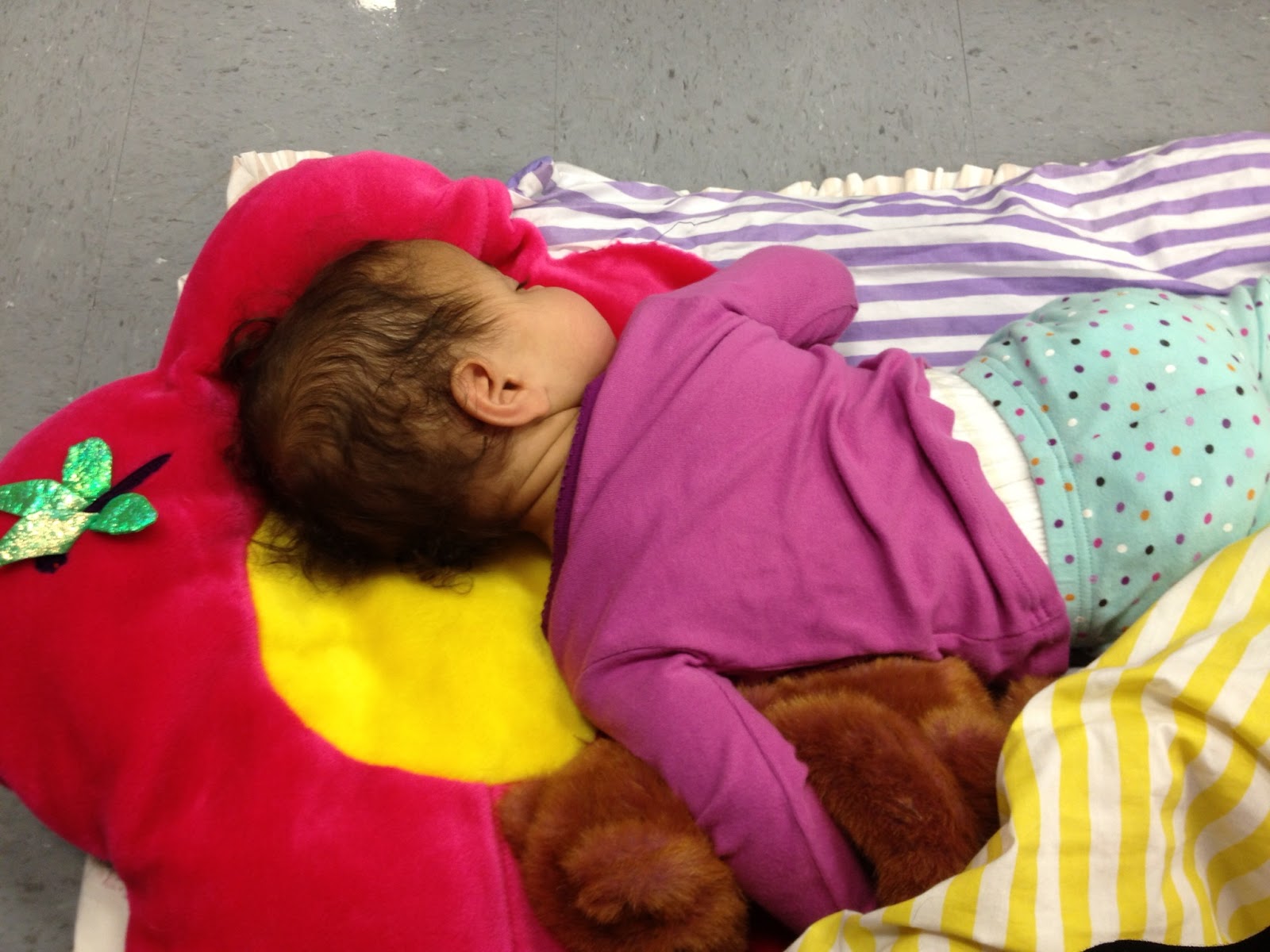 Sound asleep at church snuggled up with a teddy bear. People are amazed that she will sleep through or sit quietly at services. I'm amazed that they haven't figured out how to train a kid. 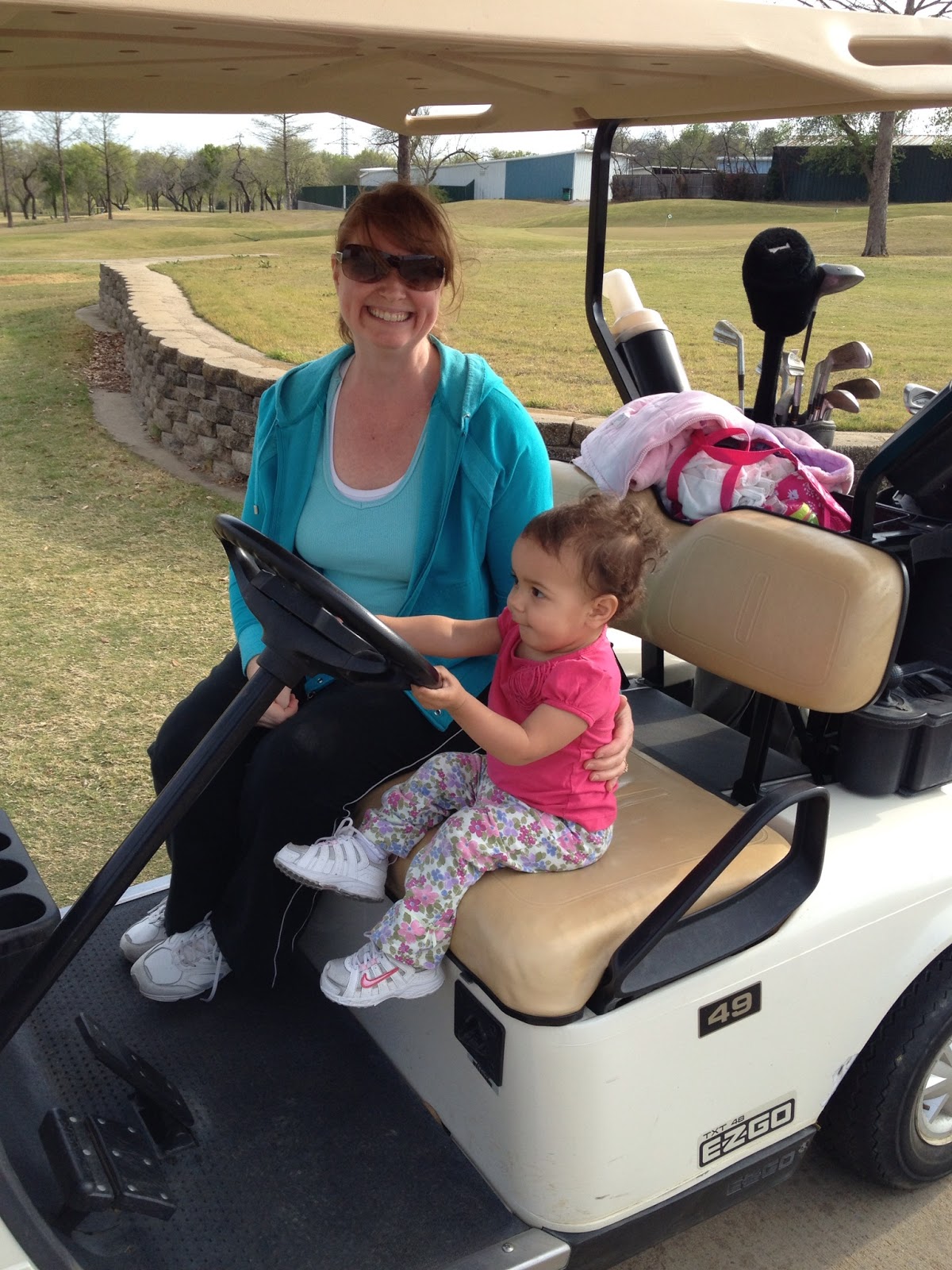 The Queen sends me a text saying "let's play golf tonight". Okay. Twist my arm. There is irony here. Trust me. 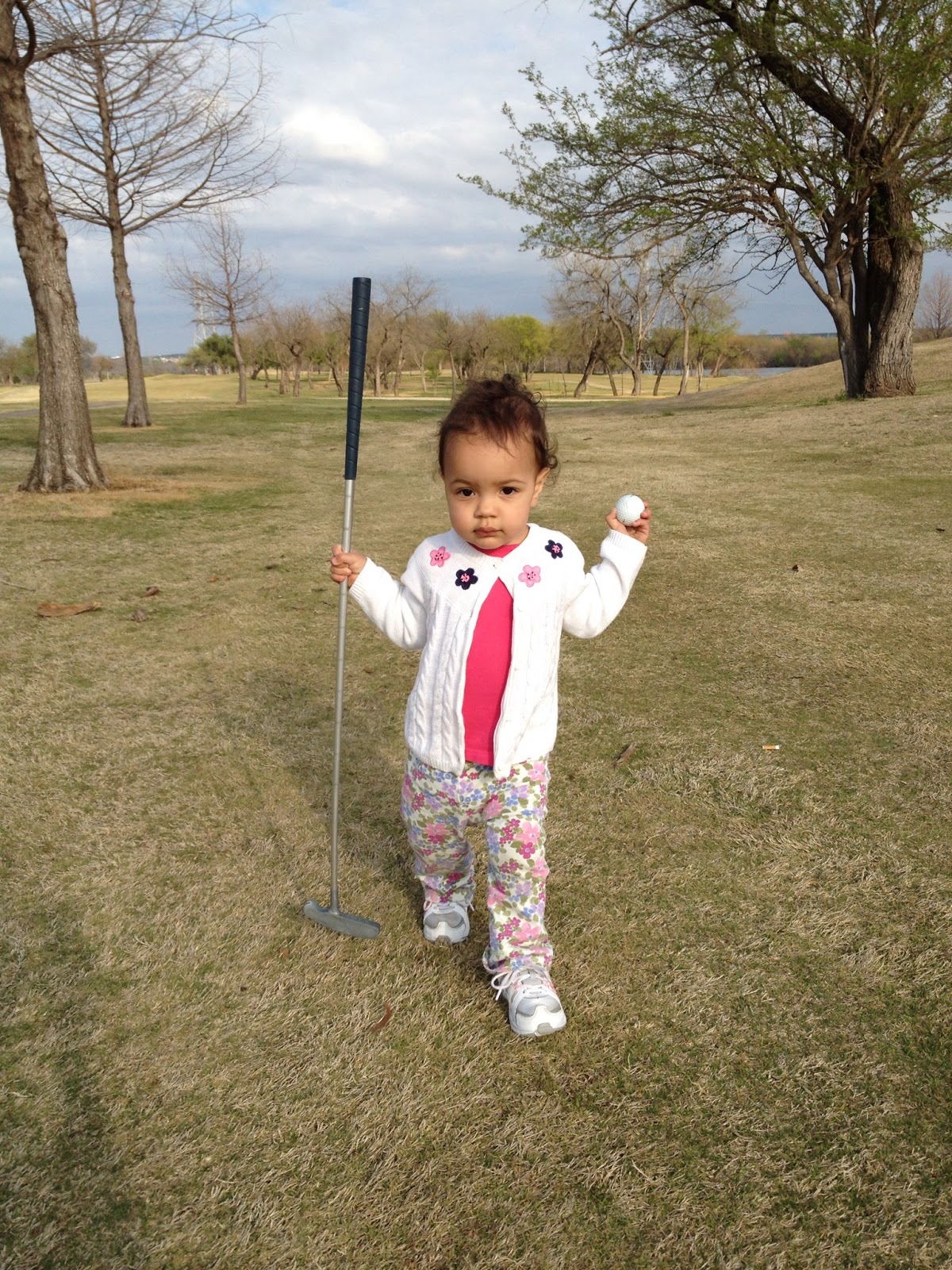 M&M working on her short game. 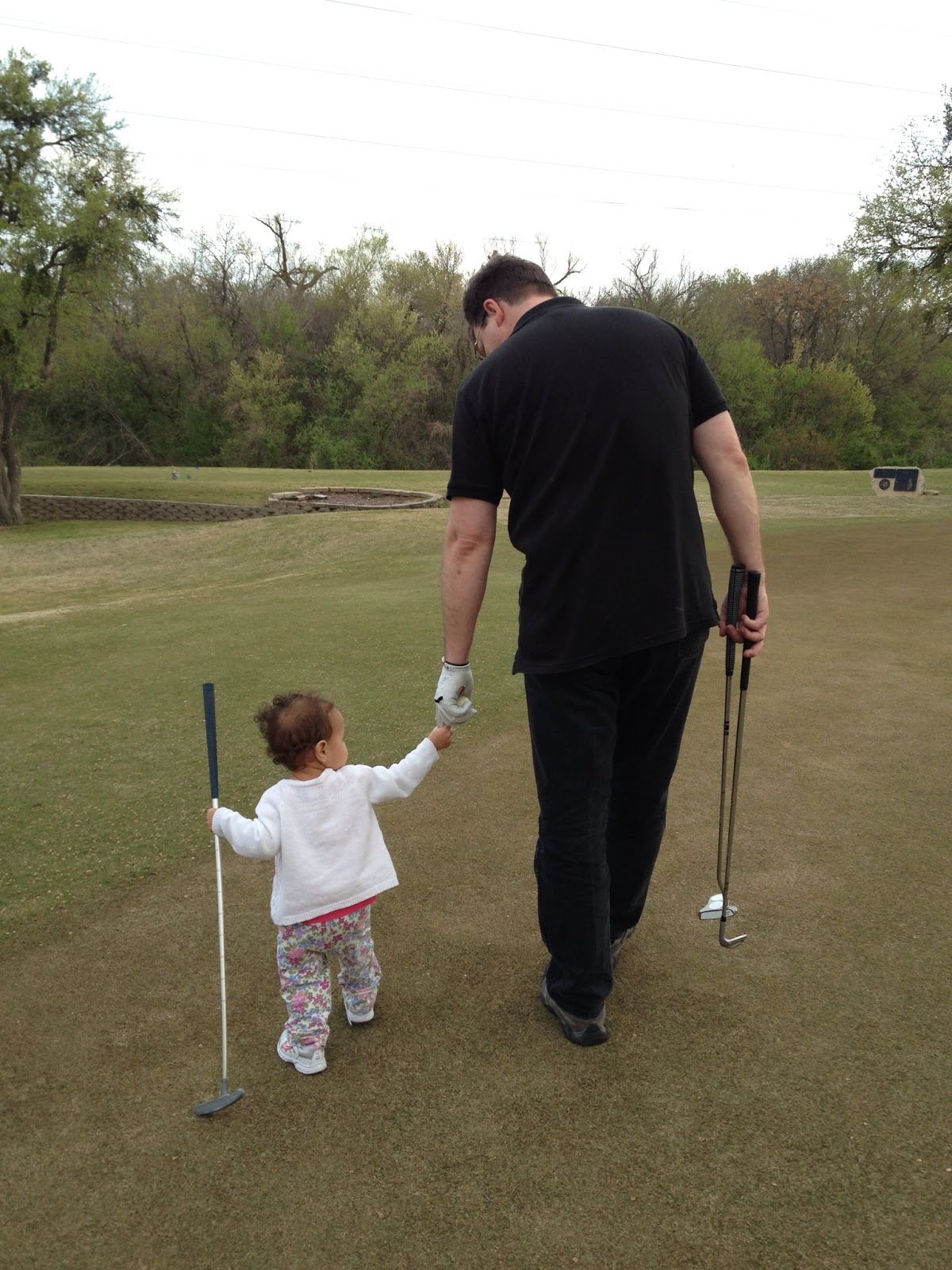 Who cares what the score was on that hole, I've got my girl. 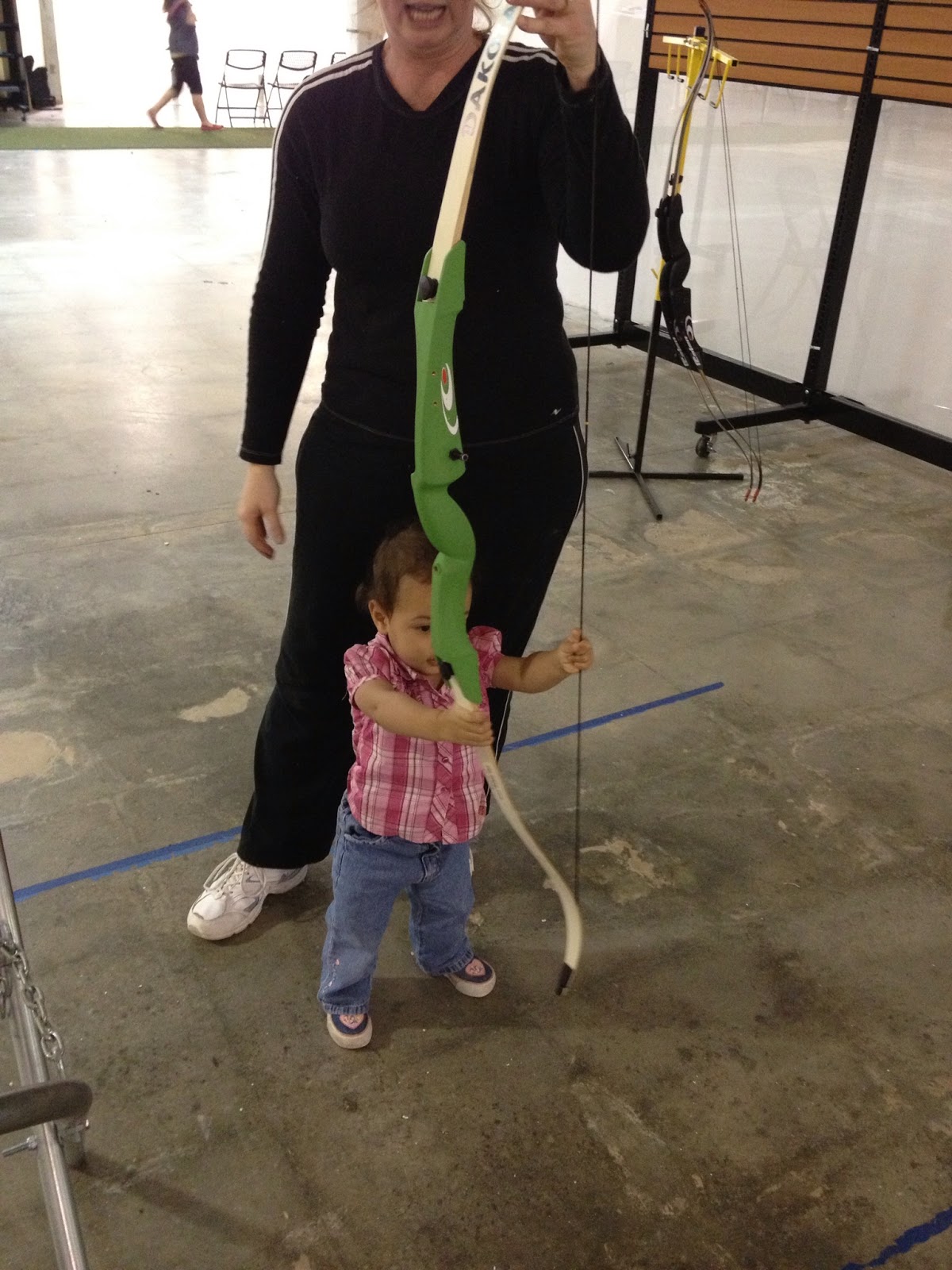 It's never too early to start teaching them...it may be too early for them to hold on properly.... 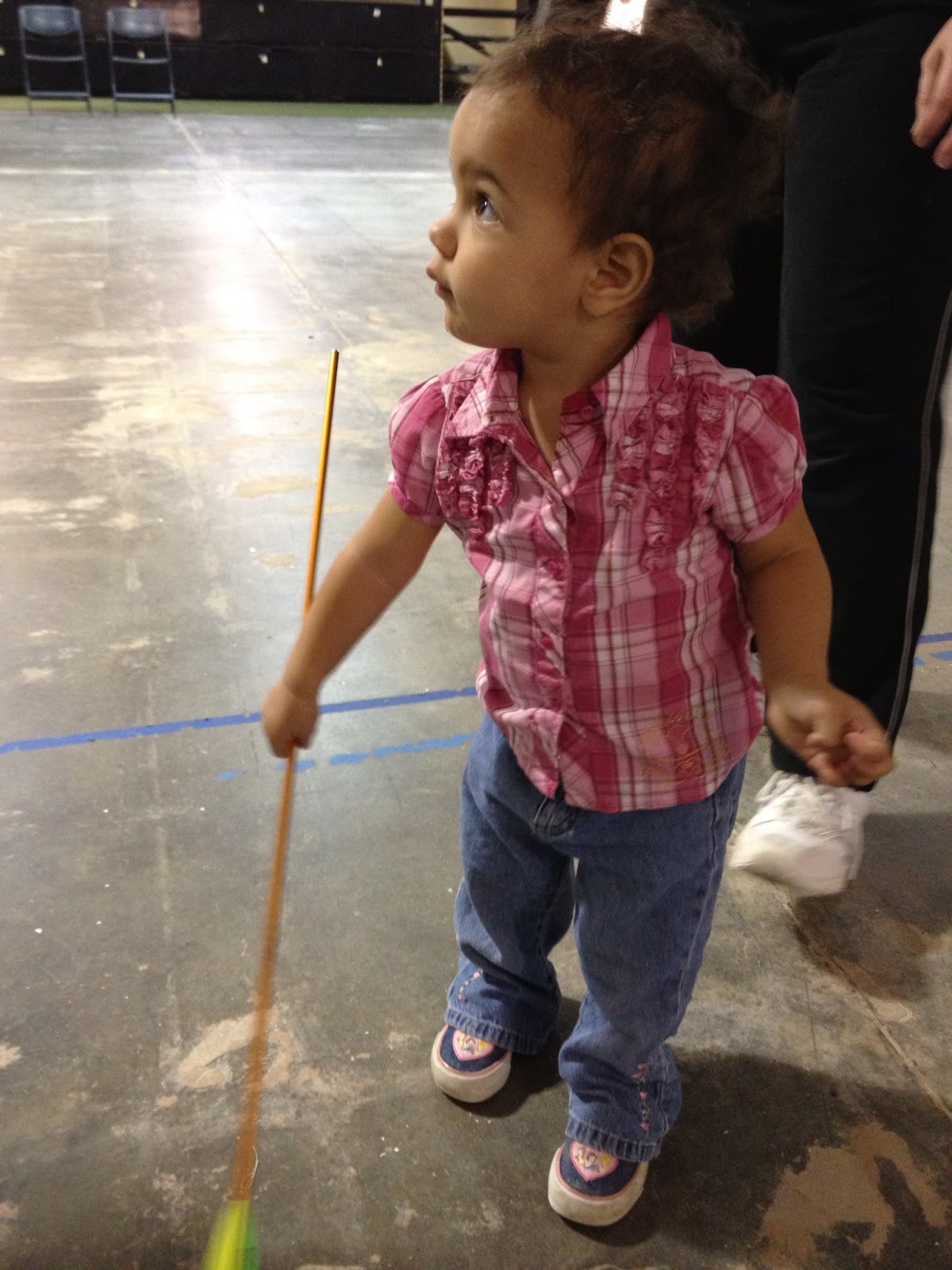 Rest assured, The Queen and I were never far enough away that the arrow would go astray. 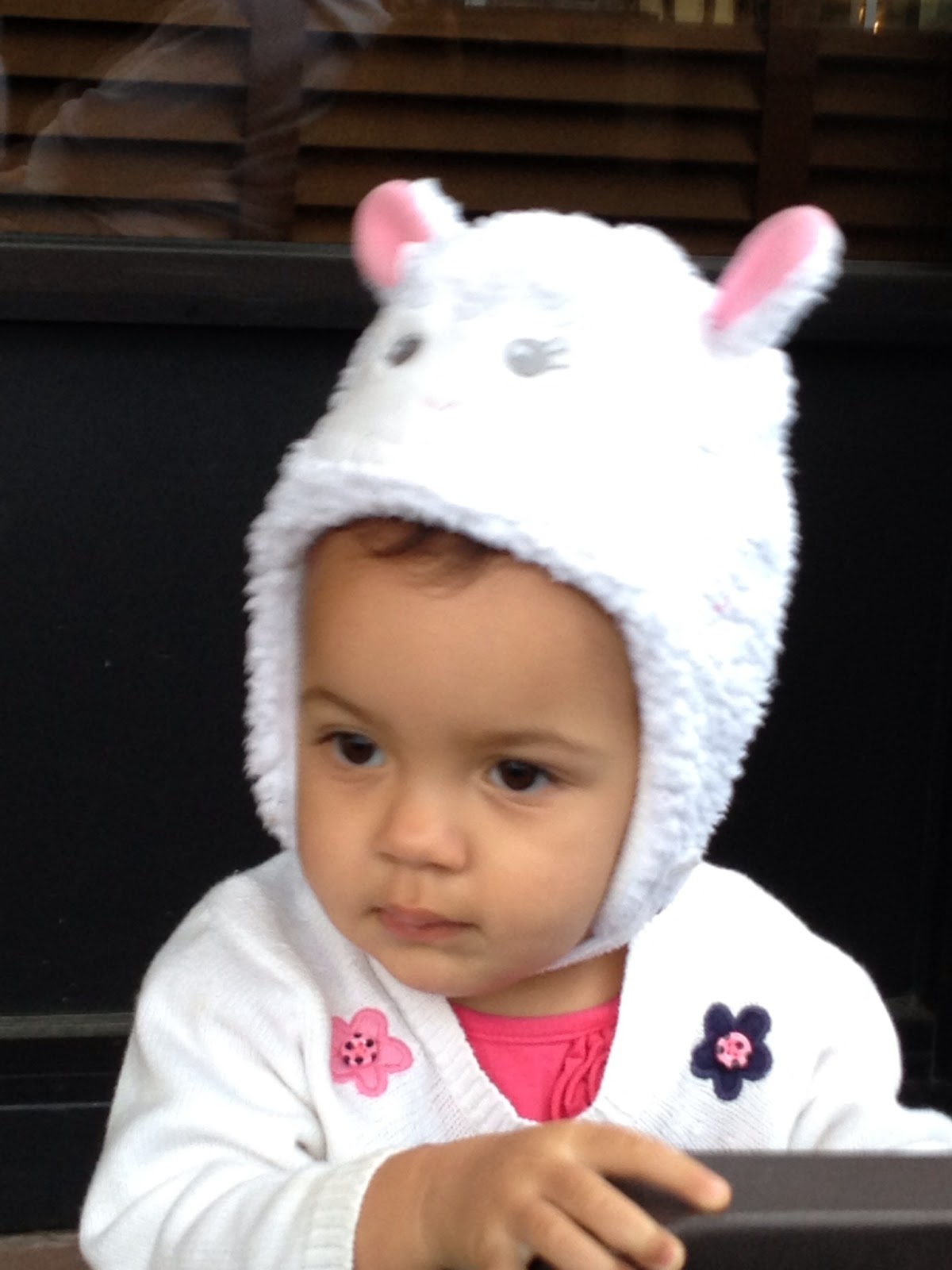 The Queen had a little lamb.... 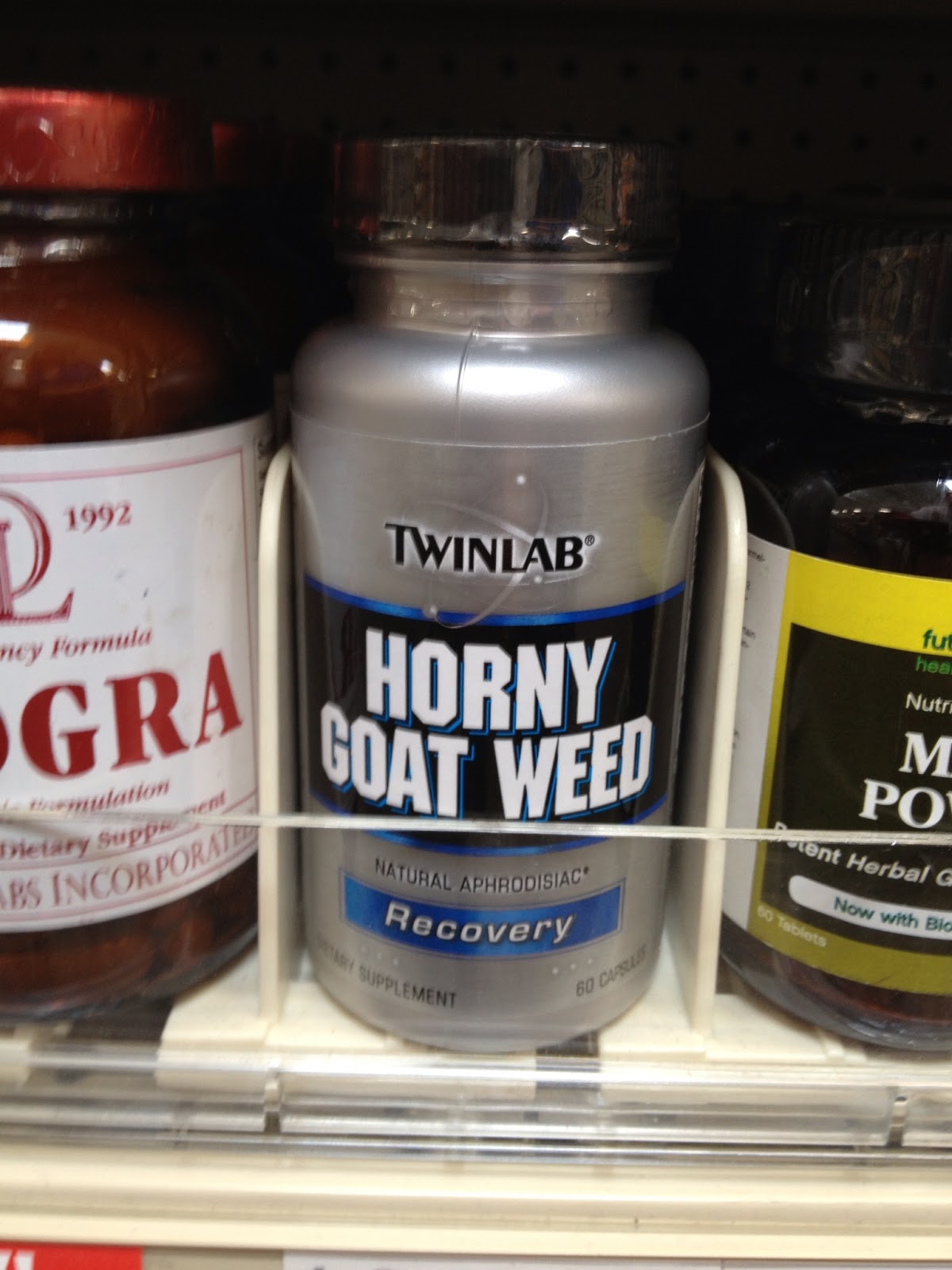 Posted by Daddy Hawk at 1:57 PM No comments:

Blood and More Advice for M&M

Well, it's official. We had our first semi-major boo boo involving M&M.

She is at that stage where she is climbing up on anything and everything she can reach. We were at The Queen's brother's place where there is a nifty bench next to the dining room table. M&M had succeeded and scrambling up on to the bench and was attempting to get a leg up on the table when The Queen and I (we were both otherwise occuppied in getting ready for the day) discovered the situation.

I said, "M&M No!" as I was dashing from the kitchen to the table.

That apparently spooked poor M&M who slid off the bench to the concrete slab floor where she landed semi-cat like on her tummy. She commenced to crying, and Daddy Hawk (feeling like a complete goober) picked her up to comfort her.

M&M had just snuggled into my shoulder for some Daddy comfort while sobbing pitifully when The Queen urgently said, "Give her to me!"

She more emphatically said, "Just give her!!"

Okay, okay...I can take a hint. I thought she was pissed at me until I glanced at my shoulder and noticed a half dollar sized red spot of M&M's blood on my dress shirt.

Somewhere on the slid down to the floor, M&M busted her lip open and was bleeding to beat the band.

Let me tell you, there is not much that will make you feel worse as a new father than seeing your child bleeding and feeling somewhat responsible for the situation.

All is well, though. No busted teeth, bruises or permanent damage. And...she still loves her daddy despite him being a moron.

Now, on to the advice:

1) "A bad marriage is a whole lot worse than no marriage at all." - David Burson, deceased.

Mr. Burson was the minister that counseled The Queen and I for marriage. He had some amazingly good insight into our relationship despite having only known us for a few months at the time we were counseling with him. He is also the minister most responsible for my spiritual awakening. I miss him a lot.

2) "The Truth of God is simple. Love God. Love your neighbor. How hard is that?" - David Burson, deceased.

That sentence more than any other brought home to me the full meaning of The Bible. When you really think about it, that pretty much sums up the Christian way of life.

RAH had a lot of good things to say that are worth listening to. He also had some ideas about sexuality that I don't necessarily endorse; but, then again, no one is perfect.

As an aside, it tastes funny too.