I just realized that my two year blogiversary passed by on August 18; and, apparently, no one noticed. Including me.

Man, I really need to get some sleep.
Posted by Daddy Hawk at 8:30 AM 8 comments:

Email ThisBlogThis!Share to TwitterShare to FacebookShare to Pinterest
Labels: Milestones

I thought I'd take a moment at the end of a very long day to impart a little wisdom from class earlier this evening (actually yesterday at this point).

"You have two ears and one mouth: use them in that proportion." - Anonymous

Or, for those of us who are mathmagically challenged, talk half as much as you listen.

If you need it simpler than that, I can't help you. You were probably too busy talking to listen anyway.
Posted by Daddy Hawk at 1:20 AM No comments:

This Week In Review

Well, the first week of law school is in the books. In more ways than one. I apologize in advance for being generally brain dead, incoherent, and otherwise pre-occupied. It’s to be expected I suppose. I am keeping up with my blog reading. Writing and commenting are suffering for what I presume are obvious reasons. So, under the Spider Robison “Callahan’s” theory that shared pain is lessened and shared joy is increased, I thought I’d take this opportunity to share some observations and thoughts from the past week or so.
The total enrollment for my incoming class (we are informally referred to as “1L” meaning first year law students) including day and evening students is about 225 people. There are 70 of us in the part time evening program. As the dean pointed out in all seriousness during orientation, 90% of us won’t be in the top 10%. Really? I didn’t know that. Thank you, Mr. Obvious. All mocking aside, my goal actually is to make the top 10% which I think is a reasonable and attainable goal given my experience and background.
Another observation from the first day of class, was the responses from the “ice breaker intros” during my “lock step” Torts class (lock step just means that everyone does the same classes in their first year). We have a group of folks with a fairly diverse set of backgrounds including 4 or 5 claims adjusters, 4 or 5 police officers, some law firm employees, a couple of engineers, a genuine research scientist, a stay at home mom or two, some fresh out of undergrad folks with a mix of “other”. There was one snark meister who claimed to be a “stay at home son.”
What surprised me most from the icebreakers was not the diversity of the backgrounds, but the high number of folks who admitted to having no idea what they planned to do with their law degree. At least a dozen people in the class of 70 have gone through the hassle to apply for law school and committed themselves to a four year total cost in excess of $80,000 with no plan of what they want to do once they are turned loose on the world. I’m sure some of those people are still discovering what area of law will be a good fit for them, but it was painfully obvious that a couple of them chose law school as a means of continuing to avoid the “real world”. Then there was the one guy who said he wants to be a lawyer so he can fight his speeding tickets. I really can’t argue with that. At least he has a plan.
Hitting the books takes on a whole new meaning in law school. Hitting the wallet is more like it. The 7 or 8 books required for my three classes cost $620. None of these would be considered light reading.
Reading is a major component of my life for the next 3 months or so. Analyzing what we read and writing about it is the other component. It has been suggested that we will need to read everything at least twice to successfully “get it.” There is a strong hint that three times might be better.
I really enjoyed the first case we read for the Criminal Law class. It was an appellate decision of a British criminal case from the 1800s. Three British seamen found themselves in the unfortunate situation of having to abandon ship into a life boat 1000 miles from the nearest land with limited provisions. Many days transpired with no land or ship in site. Provisions were consumed, and starvation ensued. One of the poor, unfortunate souls happened to be a young lad of 17 or 18 who was in worse shape than the other two. The two older, stronger survivors suggested that the boy should sacrifice himself so that the others could live. The boy, as you might imagine, was not a fan of this plan. Eventually, the boy went to sleep at which time one of the older men made sure that he did not wake up. Finger sandwiches and Bloody Maries were on the menu for the next few days until the remaining two were picked up by a passing ship four days after the Jeffrey Dahmer Memorial Banquet began. They were, of course, arrested and tried for murder. The appeal was about whether or not their actions were in accordance with naval tradition which held that cannibalism was acceptable in extreme, dire circumstances if the process of selecting the meals on wheels was fair, impartial and consented to by all.
Remind me not to go sailing with any Brits.
Sleep is a thing of the past. I don’t think I’ve been to sleep before 1:00 AM since school started. Might not happen tonight. We shall see.
I would like to know which janitorial genius thought it’d be a great idea to close off the main restrooms on the second floor for cleaning at the exact time that a 1L lock step class of 70 people not including other upper level classes were letting out for the evening.
I’ve already had two assignments due…both of which I successfully turned in on time. I’ve completed two other assignments not due until next week early. So, hopefully I can keep up with that at least.
Two of my classes will have 100% of the grade based on a single, final exam at the end of the semester. No pressure.
It’s late. I’m way too tired, and the bags under my eyes are getting heavier. So, that’s all for now. Good night. I’ll try to write when I find work. Posting will be erratic at best until I find a rhythm that works.
Posted by Daddy Hawk at 12:19 AM 9 comments:

Kitten Fight is an exciting new game based on the perennially favorite game wildly popular with all ages, Snowball Fight. Kitten Fight was invited here in the Lonestar State by bored rednecks who were sadly unable to engage in the traditional pastime of Snowball Fighting due to the obvious lack of snow. Not ones to be thwarted by a lack of frozen precipitation, ingenious rednecks burdened with an over abundance of small, fluffy white kittens noted the striking similarity between the infantile felines and the traditional orb shaped, snowy projectiles and a fun filled afternoon in 100+ degree heat ensued. 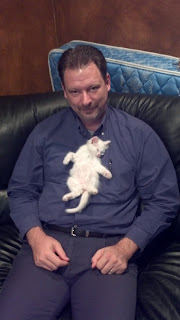 It should be noted that proper precautions should be taken by those participating in Kitten Fights. Proper attire is essential as you do not want your Sunday best to be ruined by blood (yours...those little claws are sharp) or poo (theirs...a flying kitten can be stricken with fright induced diarrhea). 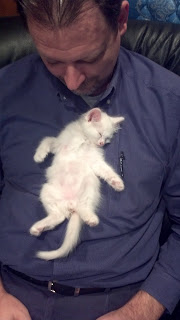 If you haven't guessed already, this is total satire. No kittens were harmed in the making of this post. In fact, the little fluff ball attached to my chest had just decided that the little pocket created by my 12 pack abs, sternum and moobs made for the perfect kitten recliner. He zonked out for a couple of minutes before deciding he was needed elsewhere.
Posted by Daddy Hawk at 7:05 PM 4 comments: