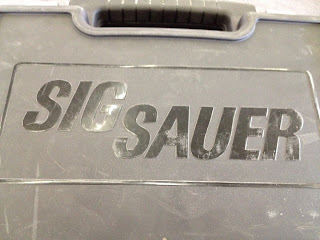 Now, long time readers will immediately take notice and say, "Shepherd, what gives? You never mentioned SIGs as being on the wish list before." True, true. But, I never said they weren't either. Times change, additional information is gathered and the cream, as they say, rises to the top.

I can also hear some of you thinking loudly saying, "But, wait a minute Shep, I thought you wanted a 1911 so desperately you were channeling the spirit of John Moses Browning with a Ouiji board."


Quite possibly true, but did I mention that SIG makes 1911s?
What you are looking at is the 1911 TACPAC from SIG. I will let SIG give you all the details your heart could desire. Basically, you get a full size, railed 1911 with a laser and standard three dot sights, kydex OWB retention holster with mag pouch, 2 magazines, a mag loader and a nice hard shell case.
Some of you are nodding your heads and saying "Uh huh, but, but...." Let me just say this about that...
I looked at everything priced at or below $1000. Really. I checked out Citadels. I looked at Rock Island Armory. A lot of people rave about them. They are solid and well put together, but I would have had to immediately sink money into it to get it to where I wanted it to be. I lusted after the Ruger SR1911 from afar on the internets; however, the fact that I have yet to see one in person anywhere put it out of reach despite it's attractive price and Ruger's reputation. I suspect they are nothing more than a viscious rumor spread by gun rags to increase magazine sales. I looked at Taurus...and kept right on looking. I looked at Colts, Kimbers and Springfield Armory. I had one grizzled old gunsmith tell me in no uncertain terms that Kimbers were crap and that they had never worked. My experience has been different, but there is enough smoke on the net to suggest some truth to his opinions. He also stated that he carried Colts and Springers in his store because they worked and had been making 1911s since 1911. Perhaps. The Colt I wanted was no where to be found, and I didn't like the build quality or feel of the Springer Loadeds I tried. Paras, STIs (keep in mind that there only 1 STI under a grand) and Remington all got brief consideration. Okay. STI got more than brief consideration. I looked longingly at the Smith & Wesson E Series (after all, it has wood grips engraved with my last initial) right up until I fondled one at the fun show today. Something about it was just not right.
Then we have SIGs. I had seen them on the web...and ignored them. Right up until a trip to a local range and gun store last week. When I mentioned my desire for a full size 1911, the gun counter dude pulled the SIG out of the case and said "Listen" as he racked the slide.
The SIG said, "shhCHING". It made a beautiful ringing sound kinda like a nice crystal wine glass. That got my attention.
I held it lovingly in my hands, and it felt every bit like I dreamed a 1911 should feel. It pointed right where I wanted it. The front and back strap checkering was perfect. The build quality was dead on perfect. You just new it would hit bullseyes right out of the box. The store wanted too much friggin' money for the one that had in stock. To be fair, I think that one was the GSR version which had the magwell extension main spring housing and tritium night sights. It sure wasn't worth almost $400 more than what I paid for the complete package today at the fun show.
Number One follower, his roomie and her boyfriend went to the gun range after the fun show to give it a whirl. Out of the box, it shot bullseyes just as I thought. It ate 120 rounds of 230 grain full metal jacket ammo from four different manufacturers without a single malfuntion. NOF's roomie (who is a new shooter) ran a couple of mags through and said she liked it better than NOF's Glock 19. That should say something.
So, to recap. One item of the wish list. One dream gun obtained. Daddy Hawk happy...for now.
Posted by Daddy Hawk at 1:18 AM