I'm hoping there are still folks out there in the ether seeing this. I've gotten used to the comments, and it'd be a shame to start over whistling in the wind to no one. The excuse/explanation is the same...kids, wife, life.

Before proceeding with the post, I'd like to welcome the two newest members of the congregation. Maddog of Maddog's Farms and David from Musings Over a Pint decided to check their sanity at the door and swell my ego by hitting the follower button. Welcome both of you. I'd say help yourself to anything in the fridge, but pickin's are slim. I need to go shopping for groceries.

First in the random, stream of unconsciousness mental musings, I have a question for my Colorado acquaintances: Just what the heck is up with Rich Wyatt at Gunsmoke in Denver? I've been watching American Guns for a while...'cause it's about guns. Duh. But, asking $3000 for a Springfield Armory 1911? Letting your teenage daughter out in public looking like a hooker? Seriously??? Someone needs to explain what he is thinking. More importantly, what are people who pay these prices thinking?

Next up, I present the following... 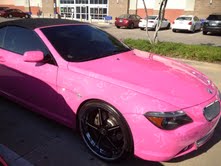 Here, let me help you get a closer look... 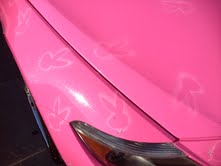 I'm not sure this falls into the crimes against humanity category, but it was definitely distinctive. Also, I didn't get a look at the owner, but I'd be willing to bet that her body had some work done to it as well. Oh, and it had metal flake in the paint. So, it SPARKLED in the sun. Like Edward Cullen. Or so I'm told.

I saw a guy riding one of those Can Am Spyder's the other day in rush hour traffic with no protective gear whatsoever. Not really abnormal around here. What drew my attention in the first place was the pair of crutches strapped to the back. Okay. I can see that. Then, upon closer inspection, I noted the reason for the crutches....an above the knee leg amputation. Oh. Dear. Lord. You're missing half your leg, and you are going to ride around DFW in traffic with no helmet. Dude, there are easier ways to commit suicide.

I had to take a day trip to Houston the other day. The client offered to pick me and my senior claims rep up in Dallas...in their corporate jet. I have a photo taken by the iLeash that really does not do it justice. There is a great photo on the net that I don't want to use as it belongs to someone else. Do a search on Cessna Citation CJ2+ on Google. That was my ride for the day. It beats flying commercial with an ugly stick any day. No TSA. No perv-o-scan. No taking shoes off. No cockpit door between me and the view out the front. Hated every minute of it. If you believe that, I have some lovely beach front property for sale that you might be interested in.

So, the other night, The Queen and I were lounging around after a long, hard battle getting The Banshee to bed. A couple of hippies decided to invade the castle and start talking about how great New York is and other liberal twaddle. The Queen and I looked at them like they were the unwashed heathen that they were. There was an uncomfortable silence in the room. Then, The Banshee cried out in her sleep. The Queen and I snapped, and it was on like Donkey Kong. They needed killin' is a valid defense here. Of course, we had to eat the evidence anyway.

They won't be coming around here anymore.

Mini Me has an adult tooth coming in surprisingly enough. Two weeks after surgery. Ain't that something?

The Banshee continues to be a living, breathing testament for birth control. She has her precious moments like last night when we were leaving the restaurant after dinner. She was dead tired. I stroked her cheek. She closed her eyes and looked positively angelic. I stopped stroking. Her eyes popped open. Lather, rinse, repeat a few times. Then, she leaned her head into my hand. It was priceless. In case you are wondering, no, it does not make up for the the screaming and shrieking.

M&M remains as adorable as ever; however, the roller coaster ride continues. Birth momma's momma has now come out of the woodwork claiming she wants M&M and has wanted her since she was born. Uh huh. I'm buying that. It's REAL convenient that she just happens to surface a couple of weeks after the birth parents find out that their first choice is out of the picture. Where the heck has she been hiding the last eight months? God will have to handle this part too. If He leaves it up to me, things might get messy. I don't want that. It's kinda hard to explain to your daughter why her bio parents vanished from the face of the earth for no apparent reason and keep a straight face. Or so I've been told.

Other than all that, life continues to treat me better than I deserve. I continue to wake up in the morning. People pay me good money to do what I do. I have a roof over my head and food on the table. I have a wife who loves me despite the fact that I'm a goob. I got blessings a plenty and not much really worth complaining about.

Here's hoping your life is the same.
Posted by Daddy Hawk at 11:46 PM