What's So New About This Year?

Looking at my writing production for 2012, it looks like someone fell off the wagon so to speak. In my defense, I've been a bit preoccupied with work, wife and kids. Hopefully, with the impending adoption of M&M and the return/moving on of The Banshee and Mini Me, time for writing will increase again. So, I thought I'd give a brief random update with pictures.

Warning: TMI to follow. It all started with explosive diarrhea and projectile vomiting. At the same time. After about eight hours worth of that, and I was prepared swear off food and water for life. Then, it stopped. I collapsed in a heap for several hours of sleep after that only to wake up to The Queen sharing my fate in the middle of the night. No fun. That was Sunday.

Monday dawned with me feeling weak but otherwise able to take nourishment and function somewhat normally. I stayed home from work to take care of The Queen and the kids. She needed it.

Tuesday dawned with me sporting a 103 degree fever. I normally run a degree or so cool compared to normal people. So, 103 is a bit of a concern. The magic elixir of alternating tylenol and advil only managed to keep me sleeping in a pool of my own sweat for three days.

Along about Wednesday or Thursday is when things really got interesting. My hands and feet broke out in a rash, the tips of my fingers and toes calloused over, and it felt like I had burned my hands and feet. This was new and interesting. It was also a giant pain in the keister. Friday I went back to work which was a mistake in hindsight as I had a sore throat.

Saturday found me sitting in the doc in a box's office trying to figure out what the hell was going on. The sore throat turned out to be ulcers in the mouth and throat. Which explained why swallowing water felt like I was gargling with broken glass.

The reason I am sharing this story is that the medical history discussion with the PA was amusing to say the least.

Me: [after relating the above history] I am concerned about shingles or staph.

Me: Yes, I've been married for nine years to the same woman.

PA: Are you active with anyone else?

PA: Well, I think it's either hand, foot and mouth or it might be syphillis.

I can assure my readers that I do not have such an interesting social disease. I have the test results to prove it. My C-reactive protien levels are about six times higher than normal indictative of a viral infection which, combined with my other symptoms, is consistent with hand, foot and mouth. I have Mini Me to thank for that one. HF&M is common in school age kids, and Mini Me just started pre-K in October. He was also worshiping Hurl!! the day before I did.

In other news, The Queen and I have made a firm decision to home school M&M when the time comes.

Other than my hands and feet peeling, flaking and cracking from a bunch of dead skin caused by the rash, I am over my affliction.

Moving right along, the forecast at Castle Erickson for Christmas Day was for cold but not freezing wet weather. Instead, we got this: 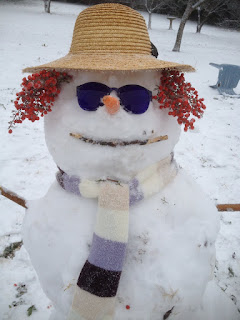 Mini Me and The Banshee are still with us for the time being. There is a pretty significant security issue developing which may see them relocated in the near future. Or it might not. I'll share details after the fact. We are waiting to hear back from the powers that be regarding what they want to do about it.

M&M remains with us and is increasingly likely to be ours forever. By my count, we are 53 days away from the earliest day we would be able to adopt her assuming the genetic donors do not file an appeal. So far, there has been no indication that they have the means or the interest in filing an appeal. Also, female genetic donor's mother's home study was denied. Apparently, brain cancer and medical marijuana use make a person unfit to be a single parent to an infant. Who knew? Grandma Toker (not her real name) has 90 days to get a neurological evaluation if she wants her home study to be reconsidered. There is no guarantee that the Texas case worker will accept it even if her home state approves her the second go around.

﻿
There will be a fight (legal...maybe otherwise too) if she gets approved. Just sayin'.

As of today, I have been at the new job for one year meaning I can no longer use the "I'm the new guy" excuse. In hindsight, it was a really good move career wise and otherwise. The travel requirement has been managable. And I can afford a better quality of bourbon.