Chester recently went in for his lopitoffame procedure. Poor guy. He'd really taken a...special...liking to his sister. Alas, their love will be forever a strictly platonic love from now on.

As you would expect, Chester was sent home wearing the cone of shame.

He was so pathetic that first day. He'd go outside and try to sniff out a spot in the yard to pee. Trot, trot, trot, head down, cone/face plant, screeching halt, SNIFF!! Lift head, watch leaves and dirt fall out of the cone. Lather, rinse, repeat. After the drugs wore off though... 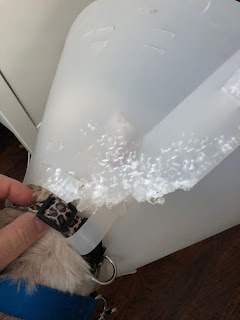 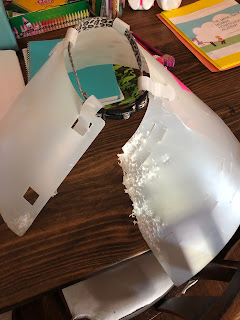 So, being an avid DIY type and closet Pinterest scanner, we gave the pool noodle "clown collar" a go. My niece, I Do It, had reported good success with Chester's brother Doc using a clown collar a few weeks previously. 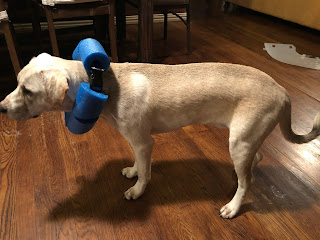 This is actually version 2.0. Version 1.0 was the same color but using a smaller diameter noodle. The smaller noodle was an immediate fail defeated by Chester's long neck and tongue in seconds. Well, version 2.0 didn't fare any better. So, we attempted a version 3.0 by doubling up the narrower and larger diameter noodles. 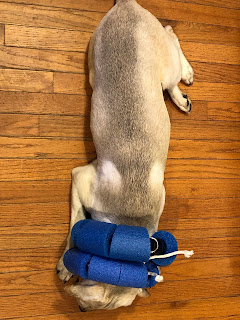 Guess what? Version 3.0 was also defeated by the same long neck and tongue as previous models. So, on the recommendation of a friend, I decided to give one of the inflatable collars a go. 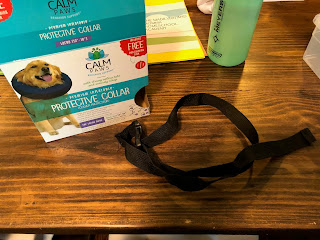 This one, in fact. Cost me $40 bucks or so at Pet(not so)Smart. Note the little black strap? It's supposed to be attached to the collar. That feature didn't even last five minutes. 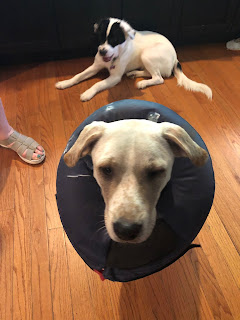 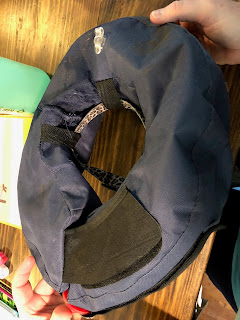 Guess what? They don't do squat when they've been aggressively deflated. 10 minutes was all it took him to have that sucker destroyed. The Queen managed to super glue the puncture holes shut, but it was a lost cause at that point. 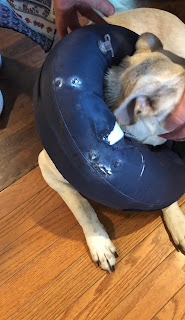 It was off again in not time. We gave up. Fortunately, he'd healed enough by that point that it was better than even odds that he wouldn't kill himself.