We Have Lost Our Furry Little Minds...Again

No. This is not a post about the election. I'm trying to avoid discussing that dumpster fire until I have time to do a lot more research than I have the ability to do right now. Suffice it to say, I have absolutely no trust in what the media or various government officials are saying. Now, if you will pardon me while adjust my tinfoil hat, we can get on with the main reason for writing this evening.

So, as attentive readers will recall from an earlier post, M&M's beloved bunny Taco was found deceased on fateful morning in April. M&M was heart broken. Despite that, it was not too many months before hints started dropping and eventually full fledged discussions were had about getting another bunny. Discussions turned into pleas for a commitments on when a bunny could be located and brought home. The pleas were not falling on deaf ears. I loved Taco as much as anyone else. However, the reality of life is a thing that has to be considered, and there were plans in place that had to be worked around. I suggested that a new bunny might be better brought home in during the new year when plans were no longer an issue and we could spend a as much time as needed getting a new bunny acclimated to the house and such.

God heard my humble suggestion; and, as God is known to do, He laughed. Not only did our plans crash and burn for reasons which are not important, but God made sure that time and circumstance put us on a collision course with a bunny.

One day in the middle of December, it was decided that The Queen, M&M and I would go out for a day of family fun. The Queen mentioned that she had never been to a local flea market where vendors of pretty much anything sell everything from cheaply made junk of Chinese origin to the finest in merchandise of questionable prior ownership. One of those vendors just happens to sell pets ranging from birds to snakes to baby rabbits.

Guess who wasn't quick enough on the distractions to prevent someone else from spotting the bunnies and immediately falling in love. A gasp of pure joy was heard and it was only dumb luck that the remaining bunnies available for sale were not exactly what M&M was looking for. For the next two weeks, all I heard was when can we go back and get a new bunny. Well, the Sunday after Christmas, I woke to be informed that the plan of the day was to obtain the necessary items to prepare the house for a new bunny. I was also strongly encouraged to make a return visit to the flea market to see the bunnies again.

No sooner did we arrive at the bunny vendor's stall than M&M began interviewing prospective bunnies for inclusion in the Castle menagerie. M&M indicated she had a particular interest in a Netherland Dwarf rabbit. It took several tries; however, M&M fell in love with one in particular. She already had a name picked out. A valiant effort was made to resist the cuteness; and, in a moment of weakness, there was brief consideration of bringing home a SECOND rabbit who had a striking black velvet coat with white accents around the eyes and chest. 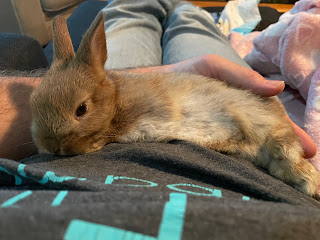 However, in the end, it was decided to bring Miss Tater Tot home to meet the family. She has settled in quite well.