As most of you are aware by now, The Queen and I are animal lovers. We just can't help it. Their lovable and hugable and squeezable and petable....and, no, we do not call them George. When we first married and merged households, The Menagerie consisted of four cats (down from five cats just before we got married) and two dogs. Since then, we have lost two more cats to unknown causes (we suspect the neighborhood fox and bobcat population) and gained a 1/2 a dog.

Since The Queen and I consider the animals to be our kids in light of the fact that we have not been blessed with the two legged variety, I thought I'd take a moment to introduce you to the rest of the family.

The black cat is J.G.. J.G. is our resident crotchety old man. He doesn't do much anymore other than lie around and try and lick himself which is made more difficult by the fact that he is fat and lazy. He is also the resident loud mouth, alarm clock, foot warmer, dog abuser and all around alpha cat. We can't remember J.G.'s exact age, but he is about 10 or 11. He came to us as a rescue when he was just a wee little tyke of 7 or 8 weeks old. My MIL found him in a grocery store parking lot after some hapless soul discovered him under the hood of their car. One of the little pads on his paws had been burned or cut; and, MIL, knowing The Queen's love of cats, made the offer to take the injured little fuzz ball off the motorist's hands. The Queen made a valiant attempt to pawn J.G. off on my FIL by naming said cute and fluffy after her dad. He is not an animal lover and was having none of that. So, that is how J.G. came to reside with The Queen. Eventually, J.G. came to live with me after the loss of my beloved Sneaker (he was a wonderful cat, but that's a post for another time). J.G. gets along with everyone else...more or less. He doesn't like the 1/2 dog who is a little too energetic for J.G.'s taste. J.G. also goes by Jiggers, Jigs, and a few others not suitable for polite company. 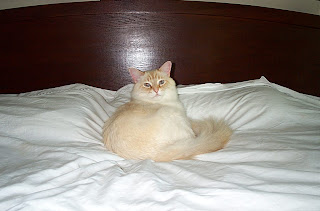 The white fuzz ball, shedding machine is Kiki (say "key-key"). Also, known as Keekernut, Keeks, and...The Yak Master 5000 Projectile Vomit Cannon. The Yak Master is The Queen's favorite. The Yak Master only tolerates me and, even then, only when he wants something. Ungrateful, little.... Kiki is our resident hunter extraordinaire. When he has a mind to, he will take down anything. Bunnies by the basketful. Birds in flight. Lizards. Snakes. He just looks pretty; but, underneath that soft, fluffy exterior, lies a cold hearted killing/puking machine. 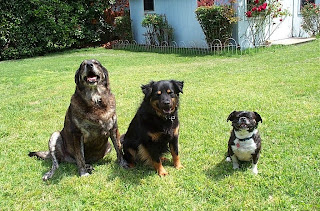 Last, but not least, we have the mutts. I say mutts in the most loving way. Not a pure bred among the bunch. Left to Right: Sasha, Tornado/Numbnutts, and Peekaboo.

Sasha is the eldest. She will be 12 in a few months. Not bad for a fat dog. She is a shelter rescue; and, if she weren't the sweetest, loyalest dog on the planet, I'd hunt those lying shelter people down and beat them senseless with a rolled up newspaper whose headline reads "terrier mix who shouldn't get bigger than 45 pounds." Ha. Haha. Ahahahahhhahahahahhhhahaaaaa!!!!! As we now know in all her full grown, 100 pounds +/- glory, Sasha (AKA The Sausage, Sauss, Snausage, Fat Dog, Big Girl, etc.) is a lab/shepherd mix. We call her a splab or a shlab. She is old and lazy, but she still likes to roll around and make funny noises. Seriously, one of these days I will success in getting a recording of her speaking.

Tornado/Numbnutts (aka The 1/2 Dog) is the newest addition to the menagerie. His momma, my other niece Julia's dog Lily, is ugly as sin. Seriously, she ugly. Beat with an ugly stick and left for dead ugly. But, apparently, looks don't matter to dogs 'cause she got her freak on with a bunch of other dogs out in Granbury and HE (and his siblings) was the result. Tornado/Numbnuts (aka 'Nado, Nummers, Nutt, The Nutter, The 1/2 Dog, etc.) has an identity crisis. He really doesn't know what his name is because it's been changed several times, and different parts of the family call him different things. After being born here at The Castle while The Queen and Julia were off having a grand time in St. Kitts without me, The 1/2 Dog went back with Julia for the formative months of his life. My BIL (The Queen's brother) had originally intended The 1/2 Dog to be his truck dog. Well, his momma Lily had other ideas and promptly trained The 1/2 Dog to be a chicken killer. This didn't sit well with the powers that be (my BIL's wife), and The Queen and I took The 1/2 Dog in to prevent dogicide. The 1/2 Dog endeared himself to my inlaws (who have been living with us for several years now), and he sorta kinda became their dog...more or less. The Queen and I like to say we have joint custody. Hence, the moniker The 1/2 Dog. The inlaws gave him the name Tornado because he is hyperactive to an extreme. The Queen and I named him Numbnutts....just because we're weird that way...and we didn't like Tornado. Anyway, the 'Nutt has settled down into a sweet, happy dog who enjoys life and occasionally kills squirrels, rats and bunnies. You'd think the varmints would learn to stay out of the yard.

Finally, there is Peekaboo (aka Boo, Boo Bear, Boozer, etc.). Peekaboo is a Boston Terrier/Pekinese mix. She is the closest thing The Queen and I have to a pure bred animal. Her momma was AKC registered Boston who had a thing with the Peke next door. Hence the name, Peekaboo (Peek -inese/Boo -oston Terrier). Clever, no? Stupid, no? Anyway, Peekaboo came to us through semi-normal channels after a failed experiment to have a playmate for Sasha. For future reference, a Blue Heeler and a Splab do not mix well together. The Heeler went to live with Number 1 Follower and lived a happy life roaming the country side. I grew up with Bostons, and thought a smaller dog might be a better fit (i.e. less of a threat) for Sasha as a playmate. The Queen and I were at Petsmart getting who knows what for whichever species when we spotted what appeared to be a Boston puppy being carried out by a young couple. After the obligatory "Dahhh, Idn't dat coot?", I said "That's the kinda of dog I want." The Queen, being the outgoing personality she is, chased the puppy owners out into the parking lot to pry the secrets of the puppy's parentage out of them. We learned that said puppy was from a breeder in Burleson (not too far from where we were) and that said breeder still had a couple of puppies from the same litter available for adoption. Phone numbers were exchanged and used, and we were able to bring Boo home in short order. Sasha, of course, ignored Boo for several weeks/months...even when Boo was draped over Sasha's neck, but it turned out I was right about Boo being a better fit playmate wise for Sasha.

The three dogs get along fine. They even have their own barbershop siren trio. We live fairly close to a major intersection leading to two major highways. As a result, we get sirens all times of the day and night for police, fire and EMS heading out for wrecks and other calls. The dogs, for reasons known only to them, feel the need to howl and bark at the sirens. Sasha always starts the song in typical, wolf-like, fashion craning her muzzle straight up to belt out a long, sustained, bass line "ahhhh-ROOOOO". Nummers joins in with a higher, multi pitched, tenor cry. Boo finishes things up with a syncopated rhythm bark.

Great stuff. Especially when I'm in the middle of a conference call.
Posted by Daddy Hawk at 10:18 AM

Email ThisBlogThis!Share to TwitterShare to FacebookShare to Pinterest
Labels: 1/2 Dog, Animals, The Queen