...And Now For The Dramatic Unveiling

Some of you who have been hanging around for a while or who have way too much time on your hands such that you can read through the archives might remember my little story back in November about my efforts to remodel the bathroom. To refresh your memory or give you a memory you didn't have, the master bathroom at Castle Erickson used to look like this:


The master bath is huge by most standards at about 7 feet wide by 17 feet long. Unfortunately, it only had the dinky corner shower and a lot of wasted space. The long wall on the right has nothing except for the small window left over from the house's prior life as a 1970s vintage ranch style prior to it's complete rebuilding in 2002 after a fire. Why the prior owner kept the little ugly window while in the midst of a complete gutting and redesign of the house I will never know. But he did, and we are stuck with it. I wasn't about to take on the task of removing one window, rebricking, cutting a hole for a new window, etc. I have no doubt that I could accomplish the task. I just don't know how long it would take, and I just don't feel like living with a very large hole in the side of my house for extended periods of time.

I have learned a few things over the course of this shower remodel that I'd like to take a moment to share with you. First, don't count on salvaging anything from the previous shower. 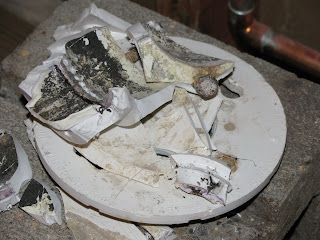 The mess of ugly, broken plastic you are looking at above is what remains of the original shower drain. During the course of demolition, the drain flange took a somewhat accidental whack resulting in a large chunk breaking off. No problem. Nothing super glue won't fix. Then I attempted to take off the bolts holding the flange onto the drain itself to remove the old shower liner. No go. Complete and total fail. One of the bolt heads broke clean off at the flange. Two others wouldn't budge for love or money. One came off after a tense battle. I then attempted to remove the drain from the pipe. Apparently, it can be done...if you have the right tools...and the patience of a saint. I had neither. I wound up destroying the drain and damaging the drain pipe. Oh joy.

This was more or less a blessing in disguise as the existing drain location would have been in an odd location for the shower The Queen and I had designed to replace the dinky corner shower. So, after a call to the psuedo-contractor brother in law and a trip to Home Depot to rent a hammer drill, it was time for... 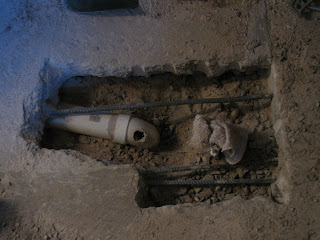 ...cutting holes in the foundation of my house. Here is another lesson learned: Never take advice from your brother in law at face value when it comes to construction matters. Do you see that little black hole in the pipe bend just left of center? Here...let me help you... 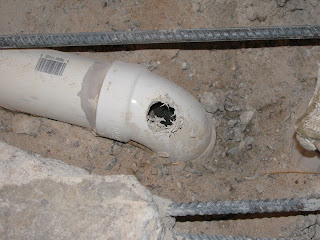 That's the hole the hammer drill went through after my BIL assured me...repeatedly I might add...that there was no chance that I would hit the drain pipe with the hammer drill. I have saved that chunk of pipe. I'm going to mount it, bronze it and give it to him as the BIL Memorial Plumbing Advice Award.

Back to Home Depot....for a new section of drain pipe and some elbow bends... 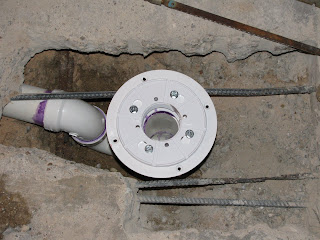 ...and some concrete to fill in the big, freakin' hole in my foundation. But, the drain is now more or less centered width-wise in my shower. Oh, one last lesson learned from this chapter: Hammer drills do not go through rebar.

One quick aside here. I bought brand new, heavy duty, all purpose work gloves for this project. They were not heavy duty or all purpose. Period. They didn't last through the demolition part of the project.

One other thing...90 degree cooper pipe elbows aren't really 90 degrees either. Their more like 87 or 85 or 91. It makes plumbing layout a challenge.

So, now the moment you've all been waiting for... 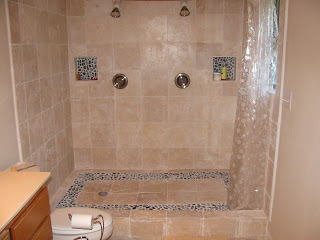 ...the new master shower at Castle Erickson. The Queen and I decided on a custom double shower after pricing new jacuzzi tubs and not being able to find one we liked for under $5000. The walls and floor are done in tumble stone tile with black river rock inset.

I am very proud to say that I did all the work myself. And I do mean ALL the work. It's not like I didn't ask for help, but only one person even offered to assist. If any thing breaks, it was those guys, Manuel Labor and Ricky Retardo, I hired that messed it up.
Posted by Daddy Hawk at 9:01 AM