…if it weren’t for the fact that he’s already dead (yes, he was a real person believe it or not). That rat fink Murphy and his crappy law have been at it again. I thought I’d lost him there for a while, but nooOOOOooo, he tagged me with a GPS tracker or radioactive dye or something.

The Queen, being the helpful and generous soul that she is, was out yesterday helping our oldest niece look for an apartment. I, of course, being the unlucky wage slave chained to my desk earning us our daily bread was not able to provide chauffer services.

So, Murphy decided to nail me by proxy.

I got a call from The Queen while engaged in my work activities to inform me that she got pulled over for 29 in a school zone and an expired registration sticker (my fault…meant to take care of that last week). We would have had another ticket for expired inspection (neither of us had a clue about that being expired), but the officer was giving The Queen a break. I think it was because The Queen waved at him just before he pulled her over. She’s friendly like that. I think it just called the officer’s attention to her.

Fortunately for my wallet, The Queen was not talking on a cell phone at the time which would have been a super special added bonus fine. She claims she was paying attention and never saw the flashy school zone lights; however, she admits to being engaged in conversation with the aforesaid niece. The Queen is a very active listener and an easily distracted driver. We were in Jamaica for our yearly church trip a few years ago where the folks drive on the wrong side of the road. The Queen was driving, and I thought I’d take a picture of her driving from the wrong seat. The Queen, who finds it impossible to allow candid photos to be taken of her, attempting to sit up straighter and pose for her photo…and ran the car up on the curb in the process. That cost me $40 for a new set of hubcaps. 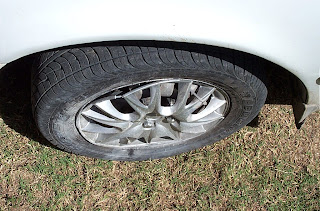 So, it is possible that the school zone sign ducked behind a tree or something while she had her head turned briefly in the direction of our niece or was otherwise distracted by something shiny.

Murphy, if it weren’t for the fact that you’re dead, I’d send you the ticket to pay. I might just have to hunt your grave down and put a stake in whatever’s left of your heart just to make sure you really are already dead.
Posted by Daddy Hawk at 8:25 AM