Here lately, in between classes and homework and work work and sleep, I've been spending a fair amount of time fantasizing about my next firearm purchase as I have The Queen convinced that my reword for successful completion of my first semester of law school is a new shooting iron for the stated purpose of becoming involved in some friendly shooting sports activities. Which, by way of brief update, I made a B+ on my second Legal Analysis, Research & Writing (LARW) class memo (good enough to be above the class average thank you very much). So, with great anticipation, I've been trying to narrow down the wish list to one (or two...maybe...no, really, three at the very most...I promise) selection to add to the armory for fun and games.

My goal is to get involved in one (or all) of the pistol action shooting sports. There is a local club that puts on IDPA and USPSA matches at least once a month. Now, I am a total noob when it comes to shooting sports. Historically, I go to the range and shoot stuff. Going to the range to shoot stuff against the clock and possible actually have to move and think at the same time...should be interesting.

Anywho, a quick skim of links related to the aforementioned sports suggests there are varying schools of thought about the best choice of weapons for a beginner getting into the sports. Basically, pick any weapon you want and there's probably a cubbyhole to fit it. The polymers are the cheapest entry price point in the games with revolvers coming a close second. Cheap 1911s can be had for about the price of a good polymer gun, but who wants a cheap 1911 for competition?

So, there I am, perusing the gun manufacturer websites looking for the next Pistole de Shepherd and debating whether it should be a double action revolver (Ruger or Smith are the only contenders in either .357 or .45), polymer plastic fantastic (Smith M&P .45 is really the only contender here unless Ruger gets off their butt and puts out an SR45) or the venerable 1911. I had almost talked myself into getting a Ruger Redhawk in .45 Colt (with the intent to get it customized for both .45 Colt and .45 ACP) because I really do like revolvers and shoot them fairly well. Then, I started second guessing that. The Ruger only has a 4" barrel or a 7+" barrel. My preference would be for a 5" barrel. Smith made the M325PD with a 5" barrel, but it was Scandium framed for light weight which equals abusive recoil in a .45 revolver. So, I just about gave up on the revolver idea for now and went back to cogitating the polymer pistols. I just can't bring myself to like Glocks. They are dead simple, reliable, rugged, etc., etc., and they are butt ugly. The Ruger SR pistols are down right sexy, but they don't make a .45 yet. That leaves the Smith M&P. Why Smith feels the need to limit them to 10 round mags I will never know, but they are a good looking pistol that feels right and even has a variety of options to choose from with respect to safety mechanisms. Not a bad choice for the price.

Then I see what North posted today. 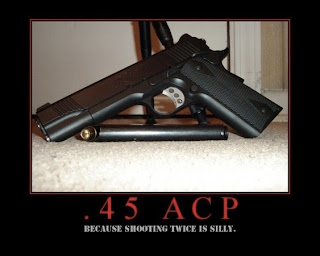 I have to say, that one photo and especially the caption instantly renewed my faith in 1911s.

I must go to school now, but rest assured that I will now be noodling the nominations for best leading 1911 in an Erickson holster.
Posted by Daddy Hawk at 7:14 PM

Email ThisBlogThis!Share to TwitterShare to FacebookShare to Pinterest
Labels: Guns