Everyone Needs to Read This and Understand 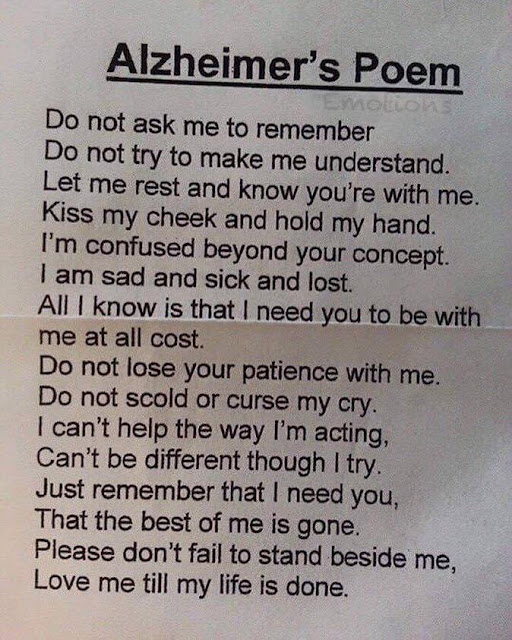 Been seeing the below copied text pop up on Facebook several times lately. You really have no idea until you go through it. At first, you think nothing of it because everyone asks the same question twice sometimes. Then, you think they might be faking it for attention or for laughs. When the person starts getting lost while driving or the same question gets asked 5 times in a row in 5 minutes, you know something is wrong. You try to tell yourself it will get better, but it doesn’t. The regression and memory gaps continue to get worse until one day they don’t recognize you or remember your name. They lose the ability to have even the most basic conversation or take care of simple bodily functions. Hygiene becomes a huge struggle. You will clean up excrement in strange places. Then, one day, getting them out of bed is no longer possible. When they stop eating and drinking, the end is close.
Alzheimer’s and Dementia are terminal illnesses which qualify you for hospice care covered under Medicare. Involve them as early as you possibly can. They can’t do everything, but what they can do will feel like a Godsend.
“It’s called the long goodbye. Rapidly shrinking brain is how a doctor described it. As the patient's brain slowly dies, they change physically and eventually forget who their loved ones are and become less themselves. Patients can eventually become bedridden, unable to move & unable to eat or drink or talk to their loved ones. There will be people who will scroll by this message because Dementia or Alzheimer's has not touched them. They may not know what it's like to have a loved one who has fought or is fighting a battle against Dementia or Alzheimer's.
In an effort to raise awareness of this cruel disease, I would love to see this on your timeline, too.

”
To clarify, the top two paragraphs are mine responding to the bottom paragraph in quotation marks which I have been seeing pop up on FB.
Posted by Daddy Hawk at 8:00 AM

Email ThisBlogThis!Share to TwitterShare to FacebookShare to Pinterest
Labels: Alzheimer's, Special Hell, Why?