The Queen, M&M and I had our first visit from the adoption agency caseworker last night. Everything went well. I was able to confirm that there is no harm in sharing basic information about the child via social media (i.e. you guys). So, it pleases me no end to tell you all that M&M is a happy and contented little girl. It took me all of two seconds to become attached to the little angel after she snuggled up on my chest and went to sleep.

I still can't share photos which really stinks because I've got some good ones. For now, you'll just have to settle for this photo with Spanky McCloud serving as M&M's stunt double. 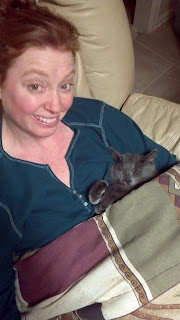 Speaking of Spanky and M&M, Spanky was not real sure what M&M was at first. I think he was concerned that he might be replaced. At first, he wouldn't go anywhere near M&M. Then he'd be extra rambunctious like he was performing or auditioning to keep his job as resident cute thing and attention whore. Finally, he jumped up on the bed where M&M was temporarily sacked out and gave her a tentative sniff from a near her feet. Then he moved around to where her head was, laid down within paw's reach and gently reached out to touch her head with his paw. I have a photo of that and will share it when I can.

The Queen has a better story about bath time. Unfortunately, we don't have photos or video of this one. The Queen gave M&M her first bath at our house. Spanky decided to come check things out. He put his front paws on the edge of the basis where M&M was being bathed, reached out to touch her head and then licked his paw where he had just touched her. He did that a couple of times according to The Queen. We're not sure if he was trying to help bath her or find out what she tastes like. Next time bath time rolls around, I'll be standing by with the camera.

Finally, the punch line of the post title. The Queen has now bestowed a new title upon your humble Shepherd. I now bear the official title of Daddy Hawk. Apparently, The Queen has been immensely impressed with how I've responded to M&M and fatherhood (especially considering my lack of parenting experience prior to M&M's arrival in comparison with The Queen's vast experience with caring for children from her days as a nanny). She's commented to others about how I've been very attentive, watchful and protective of M&M. So, she started referring to me as Daddy Hawk.

I like it. I can see it now: M&M comes home from school all sad because some boy teased her, and I will get to say, "Aw, sweetheart, which little boy does Daddy Hawk have to go kill and make it all better?" Come to think of it, I might just have to get the grips on the 1911 I plan on buying engraved with "Daddy Hawk".

To all the little boys in the neighborhood, don't even think about it. Daddy Hawk is well armed and he's watching you.
Posted by Daddy Hawk at 5:51 PM