Well, as I have said before, much as transpired since last we spoke. Life has been hectic as usual which has left me neglecting my blog among other things. I will try to tackle subjects each in turn to do them justice. So, first up is the title subject.

After literally discussing the possibility of full time RV living with The Queen for a decade, we finally pulled the trigger in March and bought a large travel trailer with the express purpose of living in same full time and (hopefully) traveling more. Of course, we picked the absolute worst time to buy a travel trailer with RV demand through the roof in the middle of a buggered up supply chain, record inflation and has eye watering gas prices.

Yeah, we have great timing that way.

We decided on a travel trailer instead of a motor home or a fifth wheel for several reasons. In hindsight, a fifth wheel probably would have been a better choice for our situation (two adults, a growing girl and a 7 animal menagerie). Having said that, the trailer we did get is about as big as “bumper pull” travel trailers go and even puts a few fifth wheels and all but the biggest motorhomes to shame in terms of usable space.

So, to answer the obvious question of “why?”, that’s both simple and complicated at the same time. We had the disastrous attempt at buying a house last year which was a blessing that turned into a curse. With the discovery of mold in the living room, it became uninhabitable for The Queen and M&M who both have allergies to the stuff. With me, the sole provider, losing my job literally on the heels of closing on the house, it became a financial disaster too. Fortunately, we were able to turn around and sell the house at slightly better than break even which left us in need of housing. We landed at an apartment while we caught our breath and figured out what options we had.

If the housing market is nuts, the apartment market in North Texas is insane. We signed a 7 month lease on a third floor unit for more than we really wanted to pay, but it was a complex built within the last 2 years and had no mold issues. There were other pluses and not much negative. We came to despise the stairs especially after coming down with Faucimonia. We moved in and started getting our feet under us again. Things were cooking along great until January when we started smelling cigarette smoke in the apartment. The complex was supposed to be non-smoking everywhere on the property.

As near as we can tell from hearing the arguments through the wall clear as day including creative use of the universal adjective and other choice words, the person who signed the lease was a married male; however, he did not live in the unit. The person who was in residence in the unit was apparently the tenant’s “side chick” and “baby mama” who desperately wanted the tenant to leave his wife and move in with her and her baby. That was not happening according to the tenant. Anyway, the hoochie in residence also turned out to have a fairly well developed smoking habit and the smoke started coming through the walls.

The complex essentially had their hands tied in terms of what they could do. Any attempts at evicting the offending person, who according to the terms of the lease should not have even been there, would have taken more time than we had remaining on our lease. During this crisis, the lease renewal offer came in with a minimum 30% increase in rent depending on the lease term selected. Needless to say, this was not a tenable situation for us. After much back and forth, we finally came to agreement with the complex management in which we were let of our lease early with no costs or penalties.

The timing of all this put us moving out just in time for the Dallas RV Show in early March where we happened to run into Number 1 Follower and Best friend along with his wife who were also on the hunt for a new travel trailer. Turns out, we both bought trailers at the show.

For those of you familiar with Texas weather, you are probably snickering in your beverage about now. For the uninitiated, March in Texas is anyone’s guess as to what you are going to get day to day. Snow, high winds, tornadoes, heat, flooding, hail, sleet…you name it, you’ll probably get it during March. Sometimes multiple varieties in the same day.

Our originally scheduled delivery date turned out to be cold, wet and very windy. Since we did not yet have a truck of towing the trailer, we imposed on Number 1 Follower who had just invested in a new diesel pickup. Due to the weather, we were forced to delay a few days and try again. We ultimately took delivery of a slightly different model than the one we originally selected after a weekend of panicky indecision. For the record, I’m glad we got the unit we did.

Why did we not have a capable truck yet you ask? Well, one of the things they tell you when you start looking at RVs is to match your tow vehicle to the size of the trailer. The trailer we chose has an empty weight of over 8000 pounds and grosses out at just under 11,000 pounds. The Queen’s Navigator is getting long in the tooth and simply does not have the towing capacity to pull the new trailer.

Surprisingly, there are very few half ton trucks that would even come close to having the capacity necessary. Ford F150s with the Max Tow package, higher gear ratio and the 3.5L EcoBoost engine is one. The were a couple of others; however, the consensus was that these options were right on the edge of the safety margin and did not handle the weight particularly well compared to three quarter ton or 1 ton trucks. There were even some three quarter ton trucks that did not have the necessary oomph to haul this puppy.

So, after an aborted purchase attempt at a dealership an hour away wherein they attempted to charge me $8000 more than the advertised  price for a “reconditioning fee” which was nowhere mentioned in the ad, we succeeded in locating a reasonable deal at a dealership 4 hours away in Houston on a gently used 2013 Ford F250 with 129,000 miles, the 6.2L gas motor, the right gear ratio, all the bells and whistles, tonneau cover and even a fifth wheel hitch already installed in the bed if we ever choose to upgrade to one.

After the purchase, we discovered records in the glove box confirming that the previous owner had just had a brand new motor installed at a dealership after the original motor crapped out just 2000 miles before we bought it. I’m positive the dealership was unaware of the new motor based on the asking price (under KBB/NADA trade in value).

I absolutely LOVE the truck. It’s a beast. It pulls the trailer without any trouble. The gas mileage while towing stinks, but that’s only been about once a month so far. Doing the math, a diesel did not make sense for us. Had we been towing every week…maybe. Diesel trucks are a significant premium over comparable gasser trucks. We would have paid $9000 or $10,000 more for a similar diesel truck not to mention the extra $0.80 to $1.20 per gallon more at the pump not including DEF, higher maintenance costs (diesels are pricy beasts to work on in terms of both parts and preventative maintenance).

We’ve taken a few “short” trips so far. Once was to a state park about an hour away as a test run to see if anything needed fixing/addressing and to help us learn the things we didn’t already know. The other two have been to east Texas for church related activities about two hours away. Our first “longer” trip is coming up in a couple of weeks when we head to Arkansas about five and a half hours away. We have a long trip in the works for October which will take us over2000 miles roundtrip to South Dakota and back as well as another 1000 to 1500 mile roundtrip excursion probably to Florida which will be shoehorned in somewhere depending on what happens in the near future on the job front. 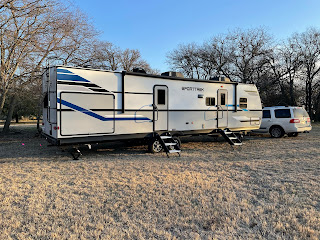 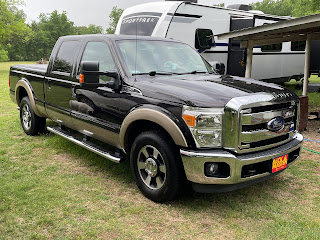 If you see a big, dark brown and tan Ford F250 stuffed to gills with people and animals towing a 38 foot trailer, give us a honk.
Posted by Daddy Hawk at 11:00 PM