So, there I was catching up on my blog reading on Monday morning...'cause the weekend was a tad busy with the family get together on Saturday following which The Queen and I spent Sunday with my mother, my sister...the devil, and her kids...the wonder nieces. Anywho, as I was saying, there I was reading away when I came across Brigid's post dated Sunday. Seems someone sent Brigid some blog bling called the Stylish Blogger Award.

It comes complete with rules and a little blog bling picture that looks like this: 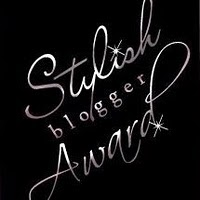 As with most blog bling awards, the rules are pretty simple: cough up some secrets (seven actually) that people don't know about you and nominate some folks for the award (fifteen actually). Imagine my surprise when I continued reading to discovery that Brigid had selected me as one of the bloggers to which she was passing the award along.

I am genuinely flattered by the recognition from someone such as Brigid who is a phenomenally better writer than I am; however, I'm still scratching my head as to what it means to be a "stylish blogger". A little help from the readership would be nice about now. I know it ain't got nothin' to do with my fashion sense or lack thereof. How would you describe my style?

Anyway, since I'm claiming the award, I supposes that means I have to abide by the rules. So, here goes.

SEVEN THINGS ('CAUSE I'M NOT GIVEN NO SECRETS) YOU DON'T KNOW ABOUT ME
1) I am a Sabbatarian. Long time readers will know that my faith is not something I talk about often despite the irony of me claiming the title of Shepherd K. I've always tended to be fairly tight lipped when it comes to my beliefs. It's not that I'm embarrassed about them or anything. I just try to live my beliefs instead of wasting my breath trying to tell people what they are.

2) I am a licensed (albeit not current) pilot. For my 16TH birthday, I was given flying lessons. My instructor was my grandmother who was an ATP rated pilot, FAA Safety Inspector and one of the two women first hired by the FAA for inspector positions back in the early 1970's. I've been planning on writing about that part of my life, but I just haven't gotten around to it yet.

3) I am 6'4" tall, and I am horrible at the game of basketball. It's true. This white man can't jump. Or shoot. I'm a terror on rebounding though.

4) My office is extremely cluttered, but very well organized. Trust me on this one.

5) Briefs. Defintely not boxers (much to The Queen's dismay).

6) I have had a moment of perfect clarity. It was not as enlightening as it sounds. (Slamming on the front brakes on a motorcycle is a bad idea. Especially in rush hour traffic. One of these days, I'll get around to sharing that story too.).

7) I cannot dance anything more complicated than a two step.

FIFTEEN BLOGS NOMINATED FOR THE SPECIAL HELL AWARD
1) 911 This Better Be Good. This is a recent addition to my blogroll and also, apparently, my most recent follower. I admit I have a morbid fascination with the world of stupid people. Where better to indulge that fascination than in the world of police blogs? Snark-o-plenty.

2) GunDiva. One of my long time followers and all time most prolific commenter. She writes for something like a hundred blogs now. At least it seems that way. I know of at least five she's got going right now (does that mean I can move on to nominee number 7?). She writes about horses, guns, life in general and the occasional medical related post.

3) PKWynn of MostlyGrocery.com. I used to work retail as a cashier for Walmart and Best Buy back in college. Every once in a while, you really need to get back to your roots...and get a healthy reminder why you left that line of work.

4) John the Texaner of All You Really Need. "A Blog of Guns, Food and Photography". Need I say more?

5) Candance of Crazy Texas Mommy. You want to talk about style? There is no mistaking this woman's style. I've never met her in person, but I have no doubt that I could pick out of a crowd blindfolded the second she opens her mouth.

6) TJIC of Comments for Dispatches From TJICistan. TJIC is currently off the air due to a little misunderstanding with the authorities in his home state of Massachusetts (I hate spelling that friggin' word). Hopefully, he'll be back up soon.

7) Momma Fargo of The Boogie Man is My Friend.... Another popo blog with the snark turned up to 11.

8) Mary Whitsell of ResidentAlien. Great stuff about teaching and living in other cultures.

9) Lawyer at Lawyer With A Gun. I'm cyber stalking him. Just for fun...and to keep my skills up. I'm not weird or anything. Shhhshh. Don't tell him.

10) Captain Tightpants of I Aim To Misbehave. I admit to shamelessly stealing his idea. He changed his blogger name from his first name to Captain Tightpants as a double homage to the show Firefly. I thought that was brilliant and co-opted it by changing my blogger name to Shepherd K. in my own little homage to Firefly. He's another police blogger, but he has the added extra special bonus of being on the bomb squad for his department. Great guy. Regular commenter. Give him some love.

12) Blue Steel with Point Blank Range. Go check out his Sunday, 2/27 post. The picture alone is worth a giggle or two.

13) Melanie of One Hot Mess. Another of my long time followers. She's a tad busy with school and all now, but she posts when she can.

15) theJu of My Curious Life. My oldest niece's blog. She's only done a couple of posts so far. Be patient and kind. I'll know if you're not.
Posted by Daddy Hawk at 6:49 PM

Email ThisBlogThis!Share to TwitterShare to FacebookShare to Pinterest
Labels: Award