So, last night, The Queen talked me into meeting her and M&M at the mall after work. I really wasn't in the mood as I had stayed up too late the night before and despise the mall on general principles, but...time with wife and daughter. So, shut up and suck it up buttercup.

The Queen had taken M&M to the mall to play at the bounce house only to discover that said establishment had shuttered its doors forever. No worries though. There is a free (we like free) play area in the mall as well as an inexpensive ($2 per ride) carousel to which M&M has taken a liking.

Anyhorseyride, after the carousel was done, we headed off to the Cheesecake Factory for dinner. I am not a fan of the Cheesecake Factory's food (there's so much on the menu that it takes forever to read and they don't do anything on the menu particularly well), but their cheesecake is mostly worth the mediocre and over priced meal. My wife's pleasure at getting a slice gluten free Godiva Chocolate Cheesecake makes up for the difference.

Anylongsetupanddigression, I told you all that to tell you this. After dinner, we cut through Barnes & Noble to get back to the main part of the mall to get to the place where we had parked. As we headed through, M&M spotted a lego table that B&N has thoughtfully set up to distract young tricycle motors while their parents become self absorbed in dead trees. Right next to the lego table (which M&M had more fun making mommy and daddy build something as opposed to doing it herself "Daddy, sit here." [patting a way to small cushion that put my knees around my ears {thus continueth my love affair with parentheticals!}]) was a clothing rack holding children's costumes for dress up play. They had firemen costumes complete with fire extinguisher and helmet, construction worker, cowboy/cowgirl, princess...and these two: 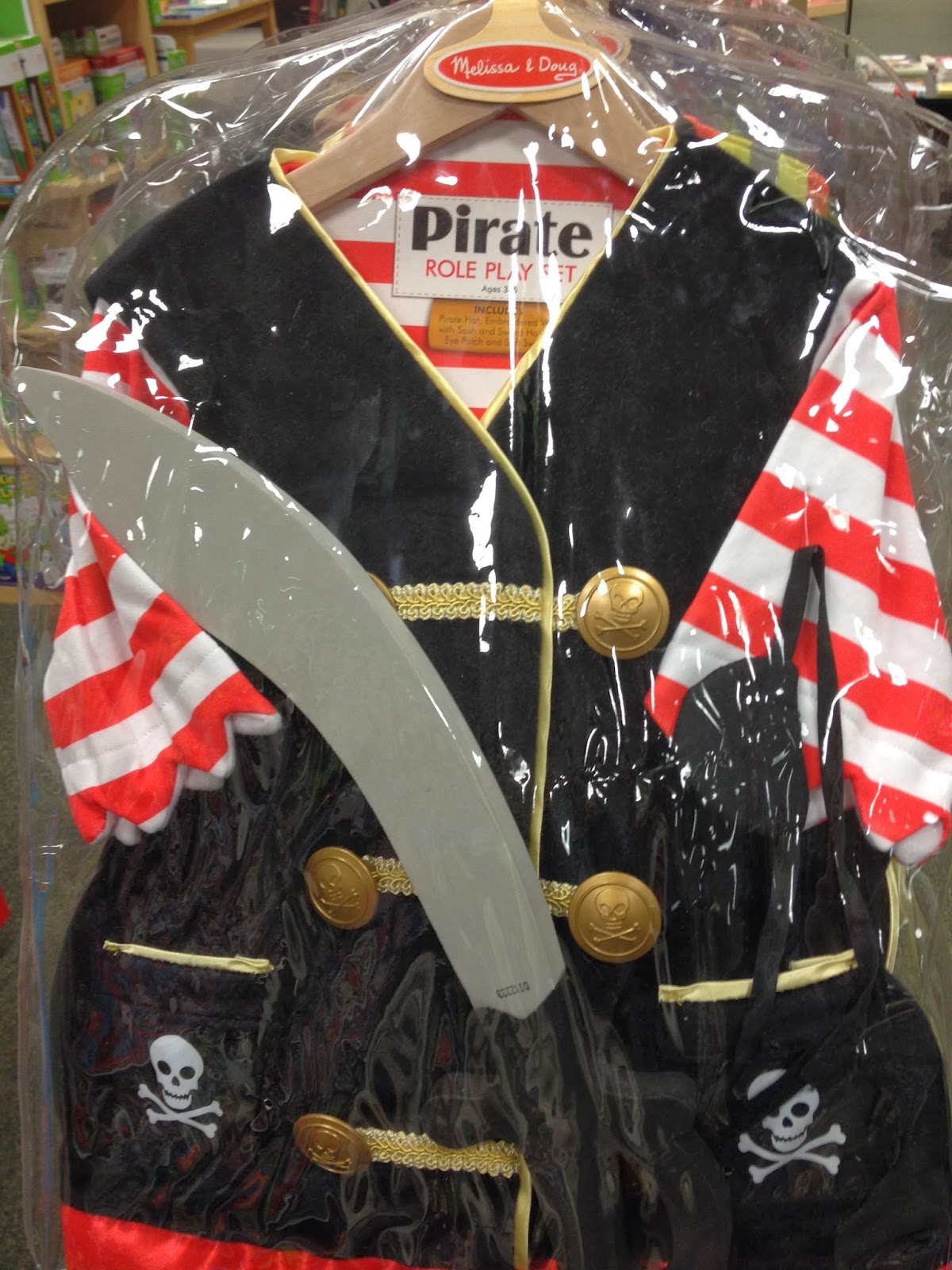 Now, here's what I find odd. Notice first the pirate outfit: the first thing you see is a big (for a kid) freakin' sword (which, for those of you educated in government schools like me, is A WEAPON). Notice the police officer uniform: badge, handcuffs, radio, ticket, hat, belt. No gun. Where's the freakin' gun? Is this England? Is that supposed to be a British Bobby outfit? This is 'Murica. Cops carry guns here. What kind of PC el toro fertilizer is this?

So, what's the message here? "Hey kids, it's okay to stab your friends when you play pirates and helpless victims but we can't point a fake gun at your friends when you play cops and self employed wealth redistributionists." Oh, and while on this subject, there was a distinct lack of Indian outfits. Also, the cowboy/cowgirl outfits lacked guns or knives. Apparently, the wild west for this generation is more mild than wild.

I feel sorry for kids these days and M&M in particular.
Posted by Daddy Hawk at 10:10 AM

Email ThisBlogThis!Share to TwitterShare to FacebookShare to Pinterest
Labels: children, Cutest Little Girl in the World, MandM, Oddities, Shameless Commerce, The Queen, Why?