The Queen and I have some friends that we visited yesterday. We were invited by the family of seven to go to lunch and see the teen boys (ages 15 and 17) play in a basketball tournament later in the evening. Between lunch and tip off, we went out to their place...which is in the middle of nowhere about a half hour west of Sherman, TX (approximately an hour and a half north of Castle Erickson give or take a few minutes).
Directions to their house (okay...it's the largest double wide I've ever seen...it's like the Winchester Mystery House of mobile homes) include "...turn off the paved road...."
I'm not kidding.
Do you see where this is heading yet?
So, anyway, the man of the house (who has known The Queen since they were both younguns growing up in the Sherman area ages ago) offered to let M&M "help" feed the goats and chickens. Before going any further, I should mention that said man of the house is, by all accounts and his own admission, the quintessential redneck.
As we approached the goat pen, I hear Mr. Redneck say "So, have you noticed the 'apparatus' on the head of that one goat?"
Huh?
It took me a moment, but then I spotted this: 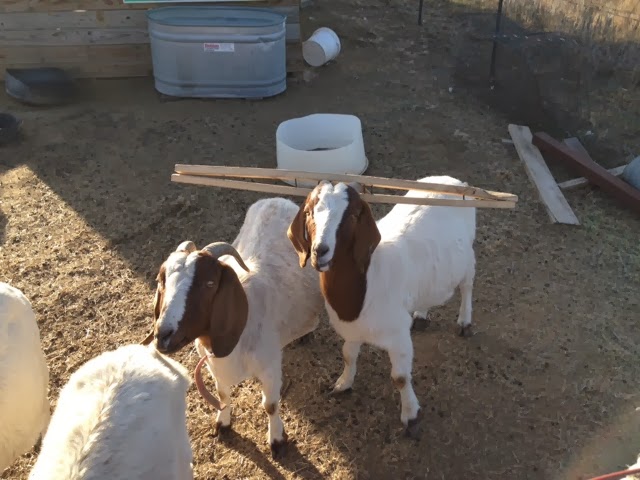 The explanation is that this particular goat likes to stick his head through the fence at which point its horns become stuck and it is too stubborn to let people help it extricate its moronic self from the predicament.
Solution: screw two sign posts across the horns preventing its head from going through the fence.
It's ingenious at the same time as it's absolutely ridiculous.
For those that may be concerned, no goats were harmed in the making of this post. The screws do not go through the horns, and the goat could probably figure out how to rid itself of the "stocks" if it were so inclined and smort enough to realize that pushing its head through the fence hard enough might cause the wood to slip off the horns.
Posted by Daddy Hawk at 7:23 PM