Since no one in particular is beating down my door asking for puppy updates, I figured now is as good a time as any to provide you all, my loyal followers, with reasonably fresh puppy pictures. As of this past Monday, the puppies are now 6 weeks old and well on their way to being cute and adorable. They had their first vet visit last Saturday at which time the vet pronounced them one and all healthy, hearty and ready for adoption. 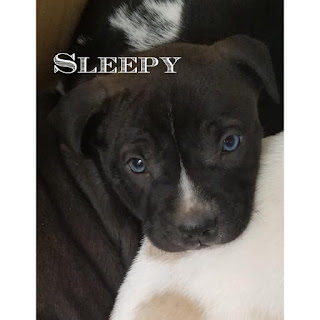 Sleepy is the closet to a Mama dog clone as there is in the litter. He has dreamy blue eyes and just a little bit of white fur. 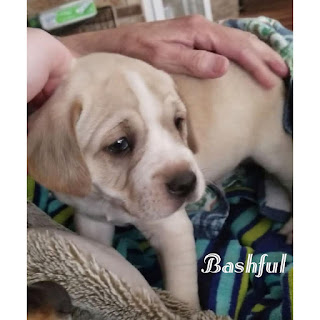 Bashful is a sweet boy with a wrinkly face. 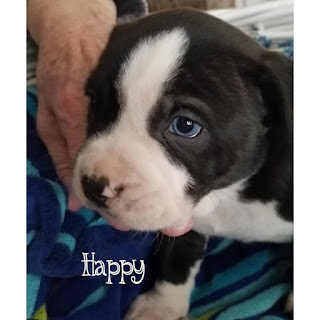 Happy is a beautiful black and white female that looks like a Boston Terrier in her coloring. She has already been spoken for and goes to her forever home next Monday. 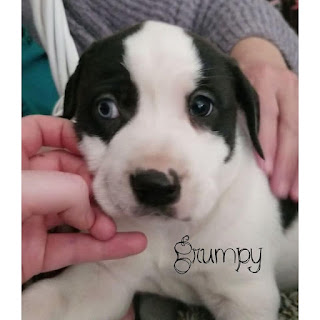 Grumpy is one of the Holstein twins, and he has a super cute face. He was on the short list for addition to the M&M Menagerie. 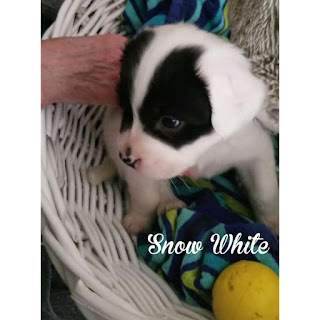 Snow White is a cute little fluff ball of fiesty femaleness. She's mostly white with a black mask and a cute little black ring around her tail. Interestingly, we thought Happy was the runt of the litter, but Snow White took that honor with a weigh in at 5.6 pounds. What she lacks in weight, she makes up for in energy. After lengthy deliberation, she was chosen as the first round draft pick to the M&M Menagerie. 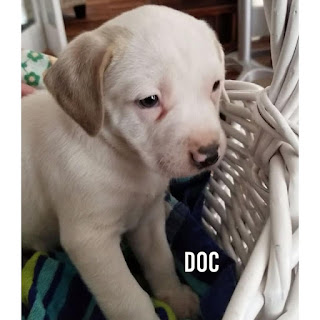 Doc is another sweet little boy who is mostly white with buff colored ears and a few buff colored spots on his back. M&M thinks he is "ADORRRABLE!!!". Another short list contender for the solo dog spot in the M&M Menagerie. 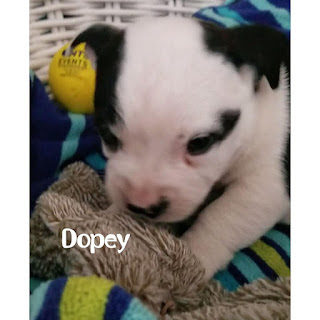 Dopey is the other Holstein twin and just as sweet natured as his brother. 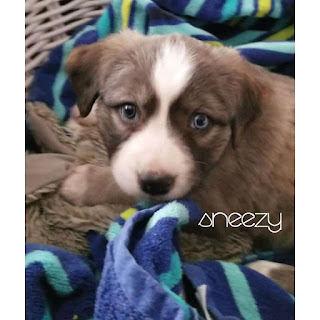 Last, but not least, Sneezy is the porker of the litter. She weighed in at over 8 pounds. She's HUGE compared to her sibs, and she is super sweet. She is very curious and loving. She is the fluffiest of  all the pups.She was the final candidate on the short list for the M&M Menagerie, and she might be the second draft pick if no one else claims her.