Yet Another Puppy Update

Some of this will be a repeat from the blog's Book of Face page, but I just wanted to provide the latest update on the pups who seem to be enjoying life with their forever homes.

The first to be "delivered" was Happy now known as "Oreo". She was last seen snoozing in a doggie bed she will need to grow into.

Happy/Oreo and I spent a couple of hours of quality time together as her ride (a friend of Oreo's new owner) was an hour later than expected. She's a sweetie, and I'm sure her new home will take great care of her.


I don't have a copy of  the video handy, but Grumpy's  family sent a video of him romping with his new boy. He looked very happy, and he seems to be in very good hands. Grumpy and Sneezy will get to stay in touch as they grow up as their families are close friends.

Next up, Sleepy, now known as Jack Jack, went to one of the veterinarian techs at our vet's office. Jack Jack was last seen making friends with his canine house mates and humans. He's in really good hands. Unfortunately, I can't lay hands on the photos I have of them at the moment as Google Drive is not cooperating.

Dopey was the next pup to take a ride. He trekked all the way to Colorado to meet his new family who named him Tyson. 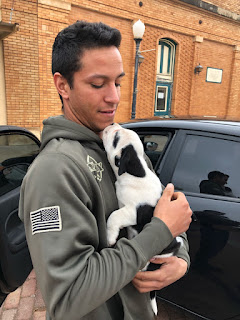 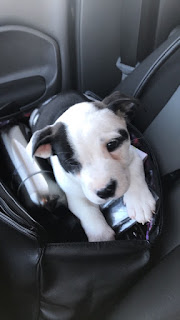 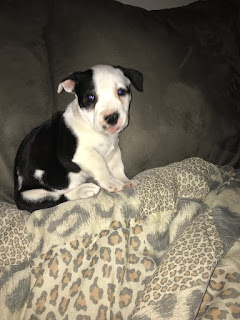 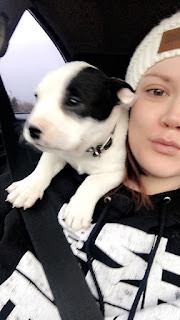 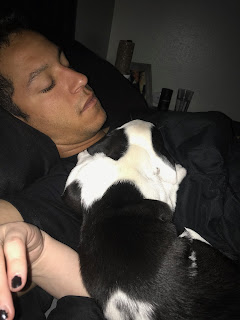 As you can tell, Tyson is just knocked out.

The remaining three pups plus Momma Dog will be staying in the family. Momma Dog was spayed last Wednesday. So, she will no longer be able to pop out the cutest little pups in the world. My Sister...The Devil will be taking Momma Dog home tomorrow where I expect her to become a regular fixture next to MS...TD's writing desk.

Tomorrow will also see Doc heading off to MS...TD's house to become Niece I Do It's dog. Last we heard, she was considering "Teddy" as the leading candidate for new names. Either way, Doc should be well loved. He's been camped out here at Casa Daddy Hawk for the last week to give Mimi a break from puppy duty, and he loves attention. He also sounds like a monkey when he whimpers.

The remaining two pups, Snow White and Bashful, will remain here at Casa Daddy Hawk as our family dogs. Snow White will henceforth be simply known as Snow although her nickname will be "Poof!". I really wanted to call Bashful "Roofus", but I was overruled. After much debate, we decided to call him "Chester." They've been having great fun (and no success) chasing Taco the rabbit around the backyard.